The Rot, Lies and Fraud In Jonathan’s Government 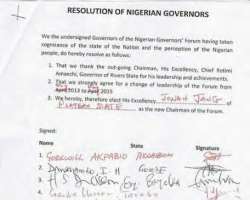 There are more than enough evidence to believe that the Goodluck Ebele Jonathan-led administration is nothing but a clueless formation of fraudulent political jobbers who have no plans for the sovereign nation called Nigeria, and this can be attested to by some of these recent incidents.

For instance, the shocking expose of the secret ballot which we gathered had been pre-arranged a month earlier to the governors` forum`s election is one of the appalling instances.

Maybe you have not heard, the exclusive document below filtered out after Rivers State`s Governor Rotimi Amaechi had been declared winner in the election of the Chairman of Nigerian Governors` Forum for the second time.

It is worthy of mention that, the Rivers State Governor has been having a running battle with the President over a trivial issue that ordinarily would have nothing to do with the C-i-C in any responsibly cultured democratic setting.

Those in the know have come out to tell us that, the President is just being petty as what has turned out today as the cheapest political bickering in history is just a mere misunderstanding between the First Lady, Dame Patience Jonathan and the Rivers Governor, a trifling matter that blossomed to muscle flexing and later gave birth to witch-hunting, backbiting, repressive attack reminding us of those tough days of despotic military rule. Anyway, that`s a story for another day.

According to feelers from one of the Governors' aides who agreed to speak to National Enquirer on grounds of anonymity, a kangaroo election had actually been held in April 2013, ever before the one that had Rotimi Amaechi declared as the winner and at the clandestine meeting, 19 of the Governors were 'forcefully' made to pledge their support for President Jonathan`s 'favoured' candidate, Plateau State`s Jonah Jang to emerge the next Chairman of the Governors` Forum.

We gathered exclusively that, the shameful thing is that, not all the 19 Governors were present even though they all succumbed to the pressure of making the President fulfill his selfish and autocratic desire of imposing his own person, a certain governor was asked to write the names of the governors and forge their signatures. Please take a critical look at the document, you will find out that, the handwriting of No. 1, 9, 10, 11, 12, 13, and 14 were written in capital letter by same person whilst others are probably those physically present at the un-constituted forum.

We were told that, it was based on this pre-arranged result that informed the open ballot agreement and while the President was basking on the euphoria of the pre-meditated election with the aim of putting Amaechi to shame, some governors (we have their names but we can`t mention them for security reasons) revolted and backed out at the last hour voting for Amaechi at the open ballot election. One of these governors got an urgent call from one of the bigwigs of the anticipated collision of political parties, APC to remember the 'son' of whom he is, and he promptly backed out and voted Amaechi.

We learnt Governor Jang`s camp has issued a press statement that was read by Governor Mimiko of Ondo State where they said Amaechi has got no right to vote in an election where he was an incumbent and that he supplied the ballot papers with which the forum voted, but the question that came to mind is, where were they when he (Amaechi) supplied the ballot papers and why did they vote with the papers when they knew it was from him; again how many of the governors stepped down during their second term voting process?

That's not all about the Jonathan-led government, the man who vowed, in a nationwide broadcast just few days ago to smoke out people involve in the dastardly act of terrorism has suddenly started releasing Boko Haram suspects from detention, “we will fish them out, we will bring them to justice” according to his promise, then why did he talk tough when he knew he was going eat his vomit.

From the history of amnesty in Nigeria, we all know what becomes of the 'pardoned' Niger Delta terrors who were involved in large scale kidnapping that wasted many lives including that of expatriates in oil companies, these redundant gangs are not just super rich today, they`re part of the problems plaguing the country as we learnt part of the ammunition which were supposed to have been surrendered  are still much in circulation alleged waiting to be useful for the prosecution of the 2015 election

People who see beyond their nose have concluded that, the Jonathan government might know what no one knows in the Boko Haram saga after all or why did he have to offer amnesty to terrorists, an offence that attracts as much as life imprisonment or death penalty in the Western world, and despite the fact that the wicked terror actors refused the amnesty offer, the 'coward' pleaded further with a reprieve to terror suspects in detention little wonder he once said “terrorism is a global phenomenon, we must learn to live with it, who`s Boko Haram, please show yourself” while his counterpart in the U.S, President Barack Obama is of this opinion, 'we refused to be terrorized, we will find you and bring you to justice'.

And in another development, some of the volatile statements credited to the leader of a militant group, Alhaji Mujahid Asari Dokubo singing war songs and threatening the whole nation that heads will roll should Jonathan be denied a second chance to rule come 2015 are clear justifications of the type of man our President is.

With all these, we don't need a soothsayer to tell us that, Jona`s government is not the Goodluck the nation is waiting to survive.