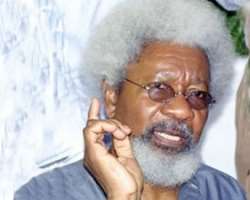 ENGLAND is a "cesspit" and breeding ground for fundamentalist Muslims, the Nobel laureate and political activist Wole Soyinka has said in an interview in which he also accused Britain of allowing the existence of "indoctrination schools".

His extraordinary attack on what he views as Britain's part in fuelling Islamist terrorism was published on the US news and opinion website The Daily Beast. It was coupled with his assertion that the 1989 fatwa issued by Ayatollah Khomeini against Salman Rushdie meant that the assumption of power over life and death had passed "to every ­inconsequential Muslim in the world".

Soyinka, the first African to win the Nobel prize for literature in 1986, made his claims in response to a question about his homeland of Nigeria being added to the watchlist of countries deemed to be incubating terrorists, after the failed attempts of Umar Farouk Abdulmutallab to bring an airliner down over the US on Christmas Day.

"That was an irrational, knee-jerk reaction by the Americans," the writer said. "The man did not get radicalised in Nigeria. It happened in England, where he went to university.

"England is a cesspit. England is the breeding ground of fundamentalist ­Muslims. Its social logic is to allow all religions to preach openly. But this is illogic, because none of the other religions preach apocalyptic violence.

"And yet England allows it. Remember, that country was the breeding ground for communism, too. Karl Marx did all his work in libraries there …"

Soyinka added: "This is part of the character of Great Britain. Colonialism bred an innate arrogance, but when you undertake that sort of imperial adventure, that arrogance gives way to a feeling of accommodativeness. You take pride in your openness."

The attempted Christmas Day bombing has helped to raise fears that some British universities are becoming places in which young Muslims are radicalised – ­Abdulmutallab attended University College, London. But Soyinka, who splits his time between the US and Nigeria, suggested that British Muslims were being radicalised earlier in their lives.

"I doubt you can have the kind of indoctrination schools in America as you do in the UK," he said. "Besides, there's a large body of American Muslims in the US – the Nation of Islam – which has created a kind of mainstream Muslim institution.

The Muslims there are open Muslims, whereas in Europe they tend to go into ghetto schools. "The Nation of Islam provides an antidote in the United States to fundamentalist Islam – which is why individuals from America have to go abroad to find radical teachings."

And , speaking about the fatwa issued by Khomeini against Rushdie, he said: "It all began when he assumed the power of life and death over the life of a writer. This was a watershed between doctrinaire aggression and physical aggression. There was an escalation. The assumption of power over life and death then passed to every single inconsequential Muslim in the world – as if someone had given them a new stature.

"Al-Qaida is the descendant of this phenomenon. The proselytisation of Islam became vigorous after this. People went to Saudi Arabia. Madrasas were established everywhere."
*The Guardian, UK. Tuesday, February 2, 2010