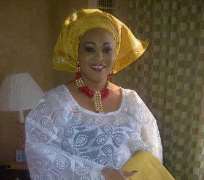 /Bukky WrightA lot has been said and written about this beautiful Nollywood actress, Bukky Wright. From her controversial love life to one scandal to another, yet this star actress has never wavered but continued to thrill her fans.

Undoubtedly one of the most talented and beautiful actresses in the Nigerian film industry, Bukky Wright cuts the image of your ideal sexy figure with the right curve at the right places, despite her age (She was 45, March 2012). Bukky is very much at home with any given role. AJIBADE ALABI met this mother of two whose full names are-Oluwabukola SekinatAjoke Wright. Excerpts:

MANY negative stories have been written about you in the past, how do you react?

Yes, as a human being, having blood running in my veins, I feel bad. But usually, I just think about it for a few minutes and I move on.

At what point in your life did you resolve not to be bothered about such stories, especially on the current marriage controversy?

When some stories are written about you so many times, it gets to a point that you won't be bothered about them again. I just feel perhaps, they want to sell their newspaper.

As a human being, I always say that life and business are like a race. If you want to win a race, you don't look back or worry about what anybody is talking or writing about you.

What about the issue of your marital status, that you are now married to a man without officially being divorced your previous marriages?

Could you recall any particular negative story that had been written about you in the past which you cannot forget inn hurry?

I don't think about my past but my present. It's just like writing a story and producing it. Once I'm through with it, I forget and begin to think about another one. Also, it is like aYoruba adage that says; "Eni to su ni o gbagbe eni to ko o ni gbagbe", meaning the man who harms may forget but the victim doesn't forget easily.

If you believe that you can spoil the reputation of anyone with impunity, then you should realise that what goes around comes around. In those stories, I will tell you that I remember one that said 'Bukky Wright is a lesbian' and 'Gbenga Daniel Beats Wife over Bukky Wright'.

If those stories did affect you psychologically, how long did it take to get over them?

It affected me psychologically for some time, but I later overcame it and moved on. Having weighed the pros and cons of it, I just concluded that after all, they didn't say I was a thief.

If you believe you are not what they claimed you are in those stories, what action did you take?

If you are to write your autograph, what events or incidents will occupy prominent chapters?

Okay, my parents, my children and people that I had contact with while growing up. I would also talk about people that have tried to make or break me.

You must definitely have experienced some setbacks in your career and in life; when specifically was this?

Earlier, you talked about your parents, your children and some other people that you've met on your way up in life, but you never mentioned the father of your children, why?

That's why I said you might have met some people that would try to make or break you.

Could you share with me some fond memories of your relationship with the father of your children?

Oh! Fantastic! It is because he gave me what a lot of people in life will not be able to get with millions of dollars, that's why he cannot be in my black book.

I mean my two kids.

If he did that for you, why did you part ways?

It is not every relationship that you are into that will last forever.

What did you learn from that relationship while it lasted?

I learnt that whatever you do, whosoever you are and whenever you find yourself in, just thank God.

How tough was it when you had to pathways?

It was very tough, no woman in her right senses will pray for such a thing. But there are some situations you find yourself in life that you can't help. No woman would like to leave her first love for another man. A lot of women out there would have tried to make their marriage to work but when they don't work out well, what should they do?

That means they are not meant together because the will of God will always come true. If the will of God says you will remain as husband and wife forever, no one can decide otherwise, I don't blame anybody for whatever happens to him or her.

Were you heartbroken when it happened?

Oh Yeah! I was heartbroken, I know every woman out there prays to have a good home and pray to have a husband to call hers.

How many times have men brokeyour heart?

Many times, and it doesn't have to be through relationship alone. You could be heartbroken by some experience you suffered in the hands of some friends. As long as you live, you will be heartbroken one way or the other.

You later had another shot at marriage, were you under any pressure to go into it?

As I said, each time you fail, you keep tryingyour best.

Perhaps, there is something you did not do right in those two relationships as a wife?

I can't say anything because I don't know, I know I tried my best but I guess my best was not good enough. But I tell you one man's meat is another man's poison.

What was it you did wrong that you wish you could go back and correct?

Maybe your in-laws never loved you?

I'm not going to apportion blame this time around. But I will say if I was still married to the father of my children, there wouldn't-have' been that household name called 'Bukky Wright' today. This I know for sure. So, I see it as God, wanting me to go somewhere else and do something else.

So, I will be right to say that you sacrificed your marriage for stardom?

I didn't purposely do that, but it has happened. And there is nothing I can do about it. That is why I keep saying that the will of God will definitely come to pass.

Sometimes, it was reported you adopted the name Wright. So, what is the real name of your biological father?

I am happy that my father was alive at the time the story came out. And he was never bothered. He told my mother that he was not bothered because she never told him she had me for another person. And my father never in his lifetime disowned me as his child.

I appreciate "them all and thank them for their steadfastness despite all the bad reports. You are all great.
@Commpass

Jim Iyke and Nadia definitely have something going on