Northern Elders Vow To Nail Jonathan At The ICJ 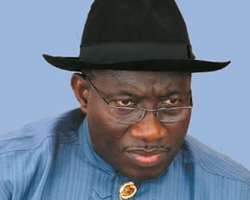 The Northern Elders Forum (NEF) have said it has enough evidence to indict President Goodluck Jonathan and the Security Agencies for Human Rights Violations in the North when it files its complaint with the International Court of Justice (ICJ).

Accusing Nigeria's government of human rights violations, NEF spokesman Ango Abdullahi said in a Voice of America, VOA interview that the group have been compiling evidence through its lawyers for a long time and that individuals, government and its agencies have been indicted.

'What we are doing now is to organize our evidence that would make it possible for us to make a very strong case against the government and its agencies, or up to individuals who may be complicit, in terms of the human rights violations that have been taking place in the last few years,' said Abdullahi.

He said the group has put together a team of lawyers that has been gathering evidence indicating that national army soldiers were involved in the recent killing of civilians at Baga.

'There is sufficient evidence, from our point of view, in terms of human rights violations that have been going on with a lot of impunity in the last three years or so around the activities of the government and its agencies and around the country,' said Abdullahi. 'I think it's because nobody seems to really take the matter seriously to draw attention, not only to other parts of the world, to the Nigerian authorities themselves.'

But supporters of the government say the administration is mandated to protect unarmed civilians and resolve the country's internal security crisis. They accused the NEF of failing to engage the government in its attempt to prevent violence, often carried out by members of the Islamist group, Boko Haram.

Abdullahi denies speculation that the Elders' Forum is in any way linked to Boko Haram.

'We didn't create the insurgents. It may have been created by somebody, but it is up to the government to prove a case that the insurgency has been created deliberately to cause havoc in the country,' said Abdullahi.

Boko Haram, which is based in Nigeria's north, has been accused of carrying out violent attacks in an attempt to force the country to adopt strict Islamic law.

Abdullahi says the government has been unable to resolve the security threats members of Boko Haram pose to the country.

'If this sect had been treated like many other sects that we've had in this country for many years, perhaps we would not be where we are now,' continued said Abdullahi, 'there [have been] thousands of people detained in terribly inhumane conditions all over the country. Among the thousands of people that have been in detention for many years now, only one as far as I know is in court now.'

Abdullahi says the Elders group has decided to hold the government accountable for the extrajudicial killings he says are sometimes carried out by military officials.