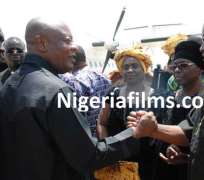 The body of late Nigerian author, Chinua Achebe arrived in Nigeria earlier today in Abuja. Prof. Achebe's body arrived in a Nigerian flag-draped casket which was received at the airport by Nigerian officials led by the Secretary to the federal government.

His coffin was then wheeled first to a church service at the Nnamdi Azikiwe International airport before proceeding to the Federal Capital Territory, Abuja. EXCLUSIVE: No N8,000 Aso Ebi, No IV For My Wedding--Princess Orders

THE MANY FLAWS OF ENTERTAINERS IN GOVERNMENT EXPOSED! +How they misused their positions in government