Orji Denies Endorsing Any Aspirant For 2015 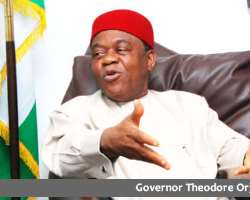 
*As Tambuwal, Ihedioha Bag Chieftaincy titles
Abia state governor, Chief Theodore Orji says he has not endorsed any aspirant for the 2015 gubernatorial election in the state.

Orji who stated this at a civic reception held in honour of the member representing Aba South/Aba North federal constituency, Hon. Uzo Azubuike at the Abia State Polytechnic, Aba, called on the people of the commercial city to desist from spreading rumour about the governorship race in 2015.

'Let me make this point clear to everybody. Aba residents are good in spreading rumour. Aba is the headquarters of rumour. Before the end of this occasion, one person will be in a beer parlour and say that Ochendo has anointed Hon. Uzo Azubuike for 2015 and the rumour will spread through the whole town. We are here to celebrate Hon. Uzo Azubuike with his people. I didn't come here to anoint anybody for 2015. When the time comes for 2015, all the stakeholders will gather and decide. It is not what Ochendo will do alone,' he said.

The governor commended the efforts of the lawmaker for his achievements in the National Assembly and posited that he has made the state proud.

'Hon Uzo Azubuike has made us proud. Aba's voice is now being heard at the House of Representatives unlike when the last representative was there and did nothing.'

Orji called for the support of the people of Aba to the programmes and policies of the government and assured that he is determined to work to change the face of the city.

Earlier in his address, Speaker of the House of Representatives, Hon. Aminu Tambuwal who bagged a chieftaincy title of Ikeoha Ngwa at the occasion, commended the governor for his giant strides in the state particularly in the area of restoring security in the state.

As the date for the next governorship election draws near, political analysts opine that Orji and leaders of the party in the state have an uphill task on how to pick a candidate for the governor election in 2015 among the array of aspirants for the position, most of whom have started oiling their political machinery.

'We know that Uzo Azubuike is contesting for governor in 2015, this reception by Aba traditional rulers' council is a ploy to woo the people.

It will be a tough battle, if it is not handled, there would be trouble in PDP,' a veteran politician in the state who pleaded anonymity told our correspondent.