The Drum Beats Of War 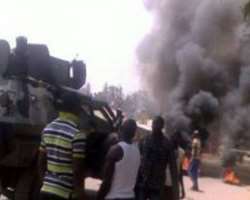 By Roz Ben-Okagbue
'The hopelessness of the situation is highlighted by the inability of the policemen to protect themselves let alone anyone else. In Bama, Borno state, over twenty policemen were killed and as if that was not bad enough, two days later 27 policemen were murdered and another 13 captured by a cultist group, Ombatse in Nasarawa state, who they had been sent to arrest. A couple of weeks before that incident, 12 policemen had been killed in Bayelsa state and there had been a violent showdown in Baga between the security agencies and the Boko Haram which resulted in the death of hundreds of innocent citizens. All of this happened in the space of six weeks! If the policemen cannot even protect themselves, what hope do civilians have?'

With each passing day, one finds reason to question whether or not Nigeria is on the brink of a civil war and in need of a declaration of a state of emergency in the whole country, not just a few states. The number of violent deaths recorded weekly is far in excess of what is expected in a peace situation with neither earth quakes nor other natural disasters. The tidal wave of uncertainty rises higher with every announcement of insurgency and there is an uneasy feeling of an impending implosion. As we approach the next election we are constantly reminded of the American prediction that Nigeria will not exist as a country by 2015 and we seem to be marching rapidly towards the fulfilment of that ominous prophecy.

As General Buhari pointed out in his speech during the recent CPC convention, the country is sinking into a state of anarchy which I dare say he contributed to with his careless utterances. The hopelessness of the situation is highlighted by the inability of the policemen to protect themselves let alone anyone else. In Bama, Borno state, over twenty policemen were killed and as if that was not bad enough, two days later 27 policemen were murdered and another 13 captured by a cultist group, Ombatse in Nasarawa state, who they had been sent to arrest. A couple of weeks before that incident, 12 policemen had been killed in Bayelsa state and there had been a violent showdown in Baga between the security agencies and the Boko Haram which resulted in the death of hundreds of innocent citizens. All of this happened in the space of six weeks! If the policemen cannot even protect themselves, what hope do civilians have?

Every state in the country is experiencing some breakdown of security or the other. The South East and South South states are kidnap zones, a threat that is also creeping into the South West. Most of the Northern states are beset with insurgency which has continued unabated since the 2011 elections and the change of the National Security Adviser appears to have made scarce difference to the situation. Calls for the Boko Haram to surrender and accept amnesty which in Nigeria basically means getting paid to stop the terrorism have fallen on deaf ears and instead the Boko Haram added insult to injury by offering the president amnesty claiming they have done nothing wrong.

In response the federal government set up yet another committee to look into a solution and possible amnesty terms. The point of developing amnesty terms for a group responsible for the murder of thousands of innocent civilians and security agencies is lost on me more so when they have stated quite clearly that they are not interested in amnesty. The very recent declaration of a state of emergency in three states may be a step in the right direction but only time will tell. What is certainly not clear is what  will happen to the violence that is still continuing in Bauchi, Kano, Plateau, Kaduna and Nasarawa states and how does this address the kidnapping in the South East and the South South or the political unrest unfolding in Rivers state.

Last week the situation was exacerbated by an exchange of irresponsible utterances from selfish political thugs whose sole motive appears to be to destabilize the polity and create a chaotic environment where their services will become indispensable. The current exchange of verbal fire seems to be between two specific ethnic groups, the Ijaws versus the Fulanis and they appear to be drawing us closer every day to the American prediction.  It is not clear at what point these two former allies became sworn enemies but the battle lines are clearly drawn and for now the press seems to be the theatre of war. Will it end in just talk or will this prove to be the catalyst that will finally push us off the edge? Could this be the beginning of the end of the Fourth Republic?

Asari Dokubo, a former militant who boasted a few months ago that he collected huge sums of money from the government which he invested in Benin Republic for the benefit of his several wives and 18 children, threatened the whole country particularly the North with a war in the event that the current president does not win the election in 2015. Calls from the national assembly for his immediate arrest and questioning, enraged him further into recording a video in which he described the Fulanis as 'destitute parasites' and stated that they were planning a coup which he said the president was doing nothing about. He ranted and raved about the equally careless utterances of Lawal Kaita and General Buhari who he described as extremely corrupt and then dared the authorities to arrest him. He threatened that Nigeria would cease to exist as a country if he was arrested and called the authorities cowards if they don't arrest him. Interestingly no attempts were made to even question him let alone arrest him.

Following Asari's explosive video there was initially a deafening silence from the presidency raising questions as to whether this was indeed the position of all Ijaws (including the president) as Asari had suggested in his video. If Asari was beating the drums of war, he did not have to wait long to find dancers as two days later Ango Abdullahi, a member of the Northern Elders Form responded to his tirade by stating that they (the Northerners)  have received the president's message sent through his spokesman Asari, and they are ready for the war promised. This was followed by more threats and counter threats by other supporters on both sides heating up the polity even more and then finally the Federal Government broke its silence. In a statement issued by Gulak, (a Northern aide to the president) the government dissociated itself from Asari's position and denounced him in pretty strong terms.

The government's response seems to have had very little impact though. Firstly it arrived a tad too late and did not receive the wide exposure that the video did. Secondly it came from two Northerners, Gulak and Bamanga Tukur (PDP chairman) who in reality were not exempt from Asari's missiles. The only Niger Deltan in or out of government who has openly taken a position against Asari's tirade is Tam David West who is known to be a strong supporter of Buhari. The damage has been done, the Northerners are simmering in silent rage and unless there is some significant measure of damage control, the result of this deepening enmity will be demonstrated at the polls come 2015 regardless of the threats.

The reasons for the rift between these two former allies, are not difficult to understand. In a nutshell, the Ijaws feel that the Northerners who have ruled the country for decades have usurped their oil, excluding them from participating in the benefits accruing from the oil production despite the fact that their environment was damaged in the process and their people impoverished. The Northerners on the other hand feel cheated out of the presidency after the death of YarÃ¡dua truncated the Northern rule just two years into 'their turn' (according to the PDP zoning formula), and are determined to regain the presidential seat come 2015. But the Ijaws do not want Jonathan's term to end in 2015; they have benefitted immensely from this government and they do not want the party to end. They are prepared they say, to fight to the last man if Jonathan is not re-elected; well you can hardly call it an election if people are coerced into returning him to power. With both sides threatening hell fire and brimstone, what does the rest of the country feel?

Most Southerners appear to be sympathetic to the Ijaw position despite their disenchantment with the present government and their disgust with Asari's crude method of campaign. Years of resentment against the tyranny experienced during the military rule which was largely Northern has taken its toll and any suggestion of another Northern ruler seems to put everyone's back up. Asari and his supporters are counting on this and in fact invoking it to ensure that the presidency remains in the South South whilst aggressive loud mouths like Kaita and Abdullahi are playing right into his hands by reinforcing in the minds of the Southerners, the reasons why they would prefer to avoid Northern rule. Where will it all end?

History records several factors that led to the end of the second republic including a weak political structure, lack of cooperation between the states and the federal government, uprising in the North between the farmers and police, teacher's strikes  and the Yan Tatsine (remarkably similar to Boko Haram) riots in Kaduna, Kano and Maidugri. There was also economic uncertainty due to the end of the oil boom, excessive government spending and high levels of corruption. The problems leading to the end of the first republic were similar and eventually led to a civil war which the country has not totally recovered from thirty years later.

The usual ingredients for a military intervention are all present; political unrest and the attendant tension; badly structured political parties with continuous internal wrangling; corruption has reached dizzying heights and the cost of government is unsustainable; violence and security challenges are stifling our economic development and growth regardless of what the statistics say. It's a dire situation and one does not need to be a prophet of doom to wonder if what we are experiencing are the final death throes of the Fourth Republic!
(This article was written on 18th May, 2013 by Roz Ben-Okagbue).