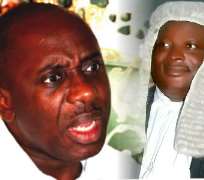 SAN FRANCISCO, May 17, (THEWILL) – The Police in Rivers State has invited the Speaker of the Rivers State House of Assembly, Rt. Honourable Otelemaba Amachree and Mr. Tony Okocha, the Chief of Staff to the Governor of Rivers State, Mr. Rotimi Chibuike Amaechi, following their claim about a grand plot to assassinate Amaechi and his top supporters in the state.

Amachree and Okocha had claimed that the withdrawal of the policemen assigned to protect them was part of the assassination plot adding that the police would any time soon withdraw the security detail attached to Amaechi to pave way for his assassination by politicians opposed to his administration as the rift between the governor and the Presidency heats up.

Addressing a press conference in Port Harcourt, the controversial Commissioner of Police in the state, Mr. Mbu Joseph Mbu, said the duo have been invited for further questioning because of the assassination claim.

Mbu also denied withdrawing all the security aides attached to both the Speaker and the Chief of Staff saying that he withdrew some personnel from the two officials because they had too many.

"The Chief of Staff to the governor has also made pronouncements to the effect that there are plans to start bombing places, burning houses and so on. This also has to be investigated…

“As the chairman internal security in this state, I will not fold my arms and allow people to make inflammatory statements and create tension in the state.

"There is police abuse in certain quarters here in Rivers state. Everybody in government house wants to see himself as governor. If the Speaker of the Rivers State House of Assembly has 15 personnel from the Special Protection Unit of the Nigeria Police, as if those men are not enough, he still acquired nine from the Mobile Police Force, Squadron 19, so 15 plus nine! What is his entitlement?

"So what we have tried to do is to make sure that every appointee or political office holder gets what he is entitled to so that we can have enough men to go on patrols," the controversial police chief said.

Meanwhile, the opposition political parties in Rivers State Friday pledged support for the embattled Governor, who has lately suffered harassments and intimidation from the Presidency.

The parties, under the aegis of the Conference of Nigeria Political Parties (CNPP) Rivers State chapter during a solidarity visit to Amaechi inside Government House, Port Harcourt, said the political crisis in the state was the main purpose of their visit.

Speaking of behalf of the parties, the leader of the CNPP, Dr. Minaebi Dagogo Jack said: “Our main purpose for this visit is particularly on the crisis that is facing the state. We hear of crisis in the State House of Assembly; we saw women protesting here and there. We saw youths carrying placards here and there in the state; the electronic and print media carrying stories of threat of all kinds…

“Your Excellency, we as leaders of the various opposition parties are greatly worried over these recent increases in security threats as a result of internal problems from one political party, the PDP in which you belong. We are aware that you are the leader of the PDP in Rivers State and more importantly the Governor of the state and so as partners of progress we deemed it most appropriate to pay you a visit and to state that Rivers State does not belong to one political party alone, but belongs to all of us including those of us from the opposition political parties.

“We cannot be quick to forget that some years ago, crises similar to this were pampered until it became a major monster that nearly swallowed everybody. We all felt the negative impact because good people refused to say anything. When you came on board, you took some bold steps to curb the situation.”