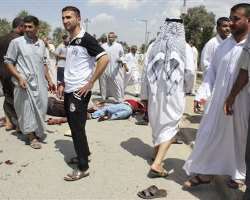 Two bombs exploded outside a Sunni Muslim mosque in the Iraqi city of Baquba as worshippers left Friday prayers, killing at least 43 people in one of the deadliest attacks in a month-long surge in sectarian violence.

Attacks on Sunni and Shi'ite mosques, security forces and tribal leaders have mounted since troops raided a Sunni protest camp near Kirkuk a month ago, and fears are intensifying of a return to all-out conflict.

The increasingly sectarian civil war in neighboring Syria is emboldening Iraqi Sunni insurgents and straining relations between the two Muslim groups in Iraq, where tensions are at their worst since U.S. troops pulled out at the end of 2011.

On Friday, one bomb exploded outside the mosque in Baquba, about 50 km (30 miles) northeast of the capital Baghdad, and a second explosion tore into crowds of people rushing to help victims of the first attack, police said.

"I was about 30 meters from the first explosion. When the first exploded, I ran to help them, and the second one went off. I saw bodies flying and I had shrapnel in my neck," said Hashim Munjiz, a college student at the site.

Another eight people were also killed and more than 20 wounded on Friday when a roadside bomb hit people gathering for the funeral of a Sunni Muslim cleric killed in Baghdad in an attack a day earlier.

No group claimed responsibility for the attacks.
Shi'ite Islamist militias, which fought U.S. troops for years after the 2003 invasion, have said they are prepared in case they need to return to war. Sunni insurgents also sometimes hit Sunni targets to provoke conflict.

Sunni Islamist insurgents and al Qaeda's local wing, Islamic State of Iraq, have stepped up attacks since the start of the year to try to provoke a wide-scale sectarian confrontation like the slaughter that killed tens of thousands of Iraqis in 2006-2007.

The United Nations said leaders from all groups needed to end the violence. "Small children are burned alive in cars. Worshippers are cut down outside their own mosques. This is beyond unacceptable," said U.N. envoy Martin Kobler.

April was Iraq's bloodiest month for almost five years, with 712 people killed, according to U.N. figures.

Since the American withdrawal, Iraq's coalition government has been caught up in a power struggle between majority Shi'ites, minority Sunnis and ethnic Kurds who split cabinet posts between them.

Sunnis, who lost their dominance when the U.S.-led invasion toppled Saddam Hussein, have been protesting for months against Maliki, demanding reforms to tough anti-terrorism laws they say are used to unfairly target their sect.

Iraqi Sunni insurgents, some linked to al Qaeda, say they have formed an alliance with the al-Nusra Front Islamist group fighting against Syrian President Bashar al-Assad.