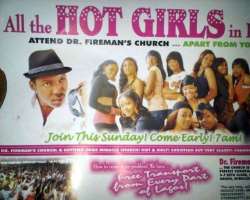 That church ministries in Nigeria is a serious business is not in doubt. It's amazingly shocking to know that men of God have now channeled an avenue in which their members should be totally loyal to them.

One of those men of God in church marketing strategy is the famous pastor Sign Fireman, who sits atop Sign Fireman Ministries, Ofuche Ukoha a.k.a Sign Fireman, he has been giving N5,000 cash to any new member of his church.

According to the source, who is a member of the Church located in Surulere, Lagos, New members are given N5,000. She further states that the money is a way of saying thank you for coming to the church. Many people who witnessed this claim that it might be a way to win back those that ran away after the episode of the late veteran actor, Enebeli Elebuwa whom he claimed he totally healed, but turned out to be a lie.

Ever since he introduced the N5,000 membership driven scheme, the church has been bubbling like never before because the news of the giveaway has spread like wildfire.