Of State Of Emergency And Criticisms 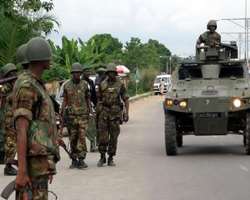 The recent declaration of state of emergency by the President Goodluck led government on Borno,Adamawa and  Yobe states as far as I am concerned is in order.It’s surprising that the government is getting criticisms from some quarters after making this declaration.It makes one think some of us do not want an end to the mayhem Boko Haram has brought on Nigeria.

I have always gone against almost all the decisions the president has taken lately most of which are at best lame.Not beneficial to the citizens.This particular decision me thinks needs our backing.We just should not criticize because we want to be heard.So far nobody is offering a different solution.Lets spare thoughts for the victims(so far)of the Boko Haram insurgency.

The menace of the Boko Haram is no news to everybody.This is a sect that wants the impossible.Nobody even know what they want.They cannot claim to be fighting against westernization because If they were they would not be using westernized weapons as well as using YouTube et-al to communicate with Journalists as rightly said by Professor Pat Utomi.This is a sect that for flimsy excuses kill,maim and destroy innocent lives.

A state of emergency is a declaration by a government made in response to an extraordinary situation posing a fundamental threat to the country. The need to declare a state of emergency may arise from situations as diverse as an armed action against the state by internal or external elements(Boko Haram), a natural disaster, civil unrest, an epidemic, a financial or economic crisis or a general strike.Other terms for referring to emergency situations are stateof exception, state of alarm and state of siege.I dare to say with the insurgency of the Boko Haram,we are in a state of alarm and siege hence the necessity of the declaration of the state of emergency.

I totally oppose the proposed amnesty programme the government wants to grant these insurgents.No sane government negotiates with terrorists.Nothing will ever appease their quest for blood and more blood.They do not even want the amnesty in the first place ,what with Shekau saying it should be the other way round-They should be granting the FG amnesty.What is the federal government supposed to do in this case?Quietly sit and watch people die on a daily basis?Should the government wait until the entire North is wiped out?

The declaration of the state of emergency is the exact antidote to their insurgency.Let’s see how the state of emergency fares in these states.Hopefully there is a significant improvement then the federal government can go ahead and make the same declaration in neighboring states(where I am sure the insurgents will run to). The priority of the government is to make sure that the citizens are secure and I am for whatever genuine measures that are being taken to make this come to fruition.

The government however should make sure this works.It has to.I totally understand the cynicism.Would you blame the people?We have been here before.The government should not in any way take advantage of the state of emergency to introduce restrictions of the human rights of the residents of these three states.There should in anyway not be any political undertone in all these.People already are thinking there are,and I hope the Goodluck Jonathan led government is really sincere about this declaration.This should in anyway not be about neutralizing political opponents(as I understand the governors of these states are Amaechi’s men).

I don’t think the government will be so stupid to trivialize the menace ofÃ‚  Boko Haram .The safety of the people should be the only reason for the declaration of the state of emergency.The military should treat the ordinary citizen humanely.There should be no abuse of the human rights of the people of Adamawa,Borno and Yobe in whatsoever way.I had to repeat this,because I really do not trust the mentality of our military officers.

I will like to end this piece by urging the federal government to follow professor Pat Utomi’s(the only person who so far has suggested another way out) other solution to this Boko Haram menace .Quoting him from his piece-For An End Game for Boko Haram, Spend Those Trillions on Education.

Ã¢â‚¬So rather than spend trillions on security, the Federal Government has to look beyond the immediate and have a long term strategy to starve organized terrorist groups of the oxygen that feeds their fire. We must begin to educate the masses of the North so that they value their lives. Education increases their level of consciousness and when a man has a heightened level of consciousness he is no longer easily susceptible to manipulation using primordial sentiments.

I’ld say spend on security as well as education so we can end this menace once and for all.