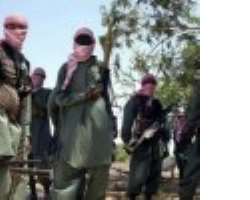 To stop the Boko Haram sect from receiving communications on the Nigerian soldiers operations in troubled Borno, Yobe and Adamawa State, Cell Phones reception have been cut off, security sources informed Pointblanknews.com.

The Boko Haram sect are said to rely heavily on cell phone communications to receive information on the activities of soldiers and other security operatives deployed to the troubled states.

The decision, sources informed Pointblanknews.com, is purely to block the extremist from communicating or receiving any information that may hinder the operation of the Military in capturing or destroying Boko Haram sects.

Mobile phone service was cut off Thursday in areas of northeast Nigeria as jet fighters streaked through the sky and more soldiers were deployed to fight Islamic extremists waging a brutal insurgency.

Witnesses saw low-flying Nigerian jet fighters over Yola, the capital of Adamawa state, which President Goodluck Jonathan placed under emergency rule on Tuesday along with Borno and Yobe states.

An Associated Press journalist in Maiduguri, the capital of Borno state, found cell-phone services unavailable since early Thursday morning on all of the country’s major mobile phone carriers. Mobile phone numbers belonging to government officials and military officials there and in neighboring Yobe state could not be reached.

Mobile phones have become the only real communication device in Nigeria for both voice calls and the Internet, as the state-run telephone company collapsed years ago. By cutting off service at towers, the military could stop extremists from receiving warnings or intelligence ahead of their operations. Authorities said they had no information about the service cut-off or refused to comment.

Nigeria’s military and security forces have tracked fighters by their mobile phone signals in the past as well, prompting extremists from the radical Islamic network known as Boko Haram to attack mobile phone towers in the region.

Under the president’s directive, soldiers have ultimate control over security matters in the three states, though his order allows civilian governments to remain in place. Over the last few days, witnesses and AP journalists have seen convoys of soldiers in trucks and buses moving through the region, as well as trucks carrying armored personnel carriers.

Nigeria’s military has promised a “massive deployment of men and resources” but have declined to offer details. This comes on top of a previous massive deployment of soldiers and police to the region. It has failed to stop violence by Islamic extremists who have killed more than
1,600 people since 2010, according to an AP count.

Nigeria’s military has said Islamic fighters now use anti-aircraft guns mounted on trucks to fight the nation’s soldiers, raising the possibility that the country’s already overstretched security forces are becoming outgunned. With soldiers now on duty in Mali, as well as across the country dealing with other security challenges, the 76,000-man force is creaking under the pressure, said former U.S. Ambassador to Nigeria John Campbell.

“While the Islamist insurgents do not offer a viable political alternative and remain divided among themselves, the threat they pose to Nigeria’s political and economic future are significant, as Jonathan’s state of emergency recognizes,” Campbell wrote in an analysis published Wednesday by the Council on Foreign Relations.

Soldiers will now try to control an arid region of some 155,000 square kilometers (60,000 square miles), with powers to arrest anyone and take over any building. That also has led to worries about the military abusing and potentially killing civilians, which has happened repeatedly in the past and during the country’s current struggle with the Islamic insurgents.

In Adamawa state on Thursday, the military announced a 6 p.m. to 6 a.m.
curfew across the entire state. Life otherwise was calm, though heavily armed soldiers had taken over for police officers on the streets of the state capital, searching vehicles and questioning drivers.

Brig. Gen. Chris Olukolade, a military spokesman based in Nigeria’s capital, Abuja, did not respond to requests for comment Thursday on the mobile phone outage. Reuben Mouka, a spokesman for the Nigerian Communications Commission, which oversees mobile phone carriers in Africa’s most populous nation, said he did not know about the services being cut off.

Funmilayo Omogbenigun, a spokeswoman for Nigeria’s dominant carrier, South Africa’s MTN Group Ltd., would only say “no comment” when asked if the government told her company to turn off service in the area. Emeka Oparah, a spokesman for Bharti Airtel Ltd.’s operation in Nigeria, said he had no immediate information about the service cut.