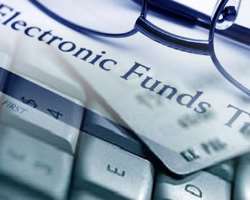 SAN FRANCISCO, May 14, (THEWILL) – The total value of electronic funds transfer in Nigeria has risen to N80 billion per day, the Central Bank of Nigeria (CBN) has said.

This, according to the apex bank shows the growing acceptance of the cashless policy, which has facilitated such growth, by a lot of Nigerians.

NIBSS provides the infrastructure for automated processing, settlement of payments and fund transfer instructions between banks, discount houses and card companies in Nigeria. It is owned equally by all licensed banks in Nigeria, and the CBN. Discount houses operating in Nigeria also hold substantial shares.

A NEFT payment is an irrevocable fund transfer instruction.

Mr Lemo noted that both the value and volumes of cash transactions executed through the NIBSS and the NEFT have doubled when compared with the use of cheques.

He said: “We have forgotten that the cashless also include high volume payment transactions such as the NNIBSS Instant Payment (NIP). The NIP now moves between N20billion and N40 billion worth of transactions daily.

“The cashless Lagos also includes the NEFT. Through NEFT, we also have tens of thousands of transactions valued over N60 billion daily. So between NEFT and NIP, we have transactions now that have more than doubled the cheque transaction volume,” he said.

Lemo, who is responsible for driving the cash-less policy, said the additional states ( Rivers, Kano, Anambra, Ogun and Abia as well as the FCT) were chosen because of the large volume of cash transactions in some of their major cities.

He said: “Recall that we started this programme actually in January last year and we are only just continuing. We are only just moving to phase two, so we have learnt all the ropes in phase one in cash-less Lagos and we believe we are ready to roll out to other six locations in Nigeria.

“We are actually working in collaboration with the Bankers’ Committee. We have a subcommittee headed by the MD/CEO of UBA, who is the cash-less champion among the bank CEOs and together with the other institution like the Nigeria Interbank Settlement System (NIBSS) and others, we are working very hard to ensure that we dot all the I’s and cross all the T’s. I can tell you that we already have our road map and we are not going to shift the implementation date of the phase two, which is July 1, 2013,” he said.

He said the previous challenge of the cash-less policy was connectivity.

“We have over 150,000 Point of Sales (PoS) machines in Lagos area where we had the cash-less Lagos. However, only 25 per cent of them are active largely because we don’t have General packet radio service (GPRS) and connectivity alive in some of the clusters and because of that, it has affected the rate at which those machines are used,” he said.

Lemo however, said these challenges are being overcome. He said: “We believe very much that it is getting better because we monitor the transactions on daily basis and we are beginning to record large volume and value of transactions done under the Point of Sales (PoS). We are not even looking only at the PoS as a major of channel for cashless; we are now looking at all the other major channels for cashless. We have the mobile telephone, which we will use to drive the cashless policy.

The cashless policy is aimed at reducing the dominance of cash in the system. It specifies penal charges for individuals and corporate organisations that want to withdraw or lodge cash above the prescribed limits.

Under the policy, the banking watchdog pegged the daily cumulative cash withdrawal or deposit limit for individual accounts at N500, 000 per day and N3 million per day for corporate accounts.