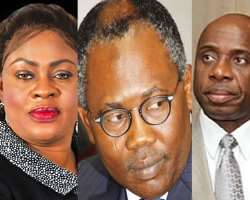 ABUJA, May 13, (THEWILL) – Embattled governor of Rivers State, Hon. Rotimi Amaechi; Minister for Justice and Attorney General of the Federation, Mohammed Adoke; and Minister of Aviation, Mrs. Stella Oduah, are to appear before the House of Representatives Joint Committee on Justice and Aviation over the controversy surrounding the grounding of a jet belonging to the Rivers State Government.

The House had last week mandated the joint committee to investigate the circumstances leading to the seizure of the plane at the Akure Airport by the Nigerian Airspace Management Agency (NAMA).

The decision to investigate the grounding of the aircraft was taken following a motion of urgent national importance moved by Hon. Idris Ahmed, who argued that the action of the aviation agencies in grounding the plane was borne out of a "witch hunt".

Others expected at the House are the Manager, Akure Airport; the Executive Chairman, Caverton Helicopters; the Airline Operators Association of Nigeria (AOAN) and the cabin crew of the aircraft.

It will be recalled that the aircraft belonging to the Rivers State Government with registration number N565RS was stopped from flying at the Akure Airport by NCAA, which alleged that the aircraft appeared to be operating illegally within the Nigerian airspace.

Specifically, NCAA revealed that the aircraft did not have a valid flight clearance for its operations on April 26 when it was apprehended. According to the agency, the last purported clearance obtained for the aircraft expired on April 2.

But the Rivers State Government has however denied the allegations, saying the action was only an extension of the alleged political war between President Goodluck Jonathan and Governor Rotimi Amaechi.