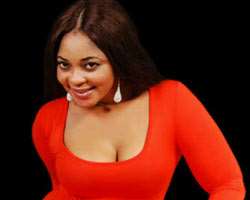 Their relationship is such that if it is Tolani Osinrin(Biodun Okeowo) that is producing a movie, Kunle Adegbite aside from being the director of the movie will also play the lead role and when it is the turn of Kunle to produce,Tolani will play the lead actress and mind you the duo will do the screenplay and at the same time do the casting together.

However, strong romantic link is said to exist between the duo.

According to the information being peddled in the industry,Biodun Okeowo who has become one of the popular actresses in the Yoruba movie industry has found her way into Kunle's heart.

The lovebirds have been an item in the social circuit of late and Kunle has also not hidden his affection for the sexy actress as he poses around her at every opportunity and also drives her Jeep.

Biodun was also said to have celebrated Kunle's trip to the USA and his birthday party to honour him by friends several days ago while Kunle also used Biodun's picture on BBM as his display picture with personal message "Missing her".

There are also stories that they are both all over each other and a reliable source informed that Biodun's decisions nowadays are influenced by Kunle.

The affair is rumoured to have started 5 years ago and it is no doubt a romance which is altar bound as the 2 lovebirds are happy together.

A source scooped that the fair-skinned thespian, after many years of single motherhood, is said to be enjoying a robust attention from Kunle.

Kunle, who is renowned for his reckless lifestyle like most of his colleagues who readily take advantage of their status to frolick with their teeming female admirers; has severally been romantically linked with many babes in and outside the industry.