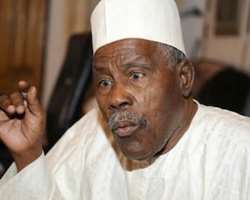 
The Joint Task Force (JTF) in Borno State, Operation Restore Order, on Monday in Maiduguri, the state capital, paraded three men suspected to be part of the gang responsible for the assassination of the late general.

The arrest came on a day JTF also rescued the parents of the lawmaker representing Kaga/Magumeri/Gubio federal constituency in the House of Representatives, Hon. Mohammed Sanda, at the Zabarmari ward of Jere council area of the state at about 9am, from the Boko Haram members who kidnapped them.


The rescued parents of the lawmakers, Alhaji Ummara Sanda Sheriff (85); and his wife, Mrs Maryam Sanda(70), were abducted on Sunday night in Ngamdu, a border town between Yobe and Borno States. Ngamdu, is about 100 kilometres west of Maiduguri.

Describing how the suspects were arrested, Musa said, “Sequel to Abdulkareem’s confession, four other members of the syndicate were identified and three of them arrested between January–March. One of the culprits is at large. So far, the three arrested are Mustapha Umar(22yrs), Goni Modu Lawal (22yrs) and Goni Ali (Bakura Bama -20yrs) .”

According to the JTF spokesperson, “Mustapha Umar was actively involved in the planning and execution of the plan that led to the killing of Maj.Gen Mohammadu Shuwa (rtd). While the two others played various indirect roles.

"Both have confessed to being members of Boko Haram under Gwange Cell with Abdulkareem as their commander who they alleged received instructions directly from Abubakar Shekau. They equally confessed to carrying out various attacks both on military and civilian targets including extorting about 20 Million Naira on two occasions from late Alhaji Ibrahim Mai Sugar among others."

“They were kidnapped on Sunday 5 May, 2013 at Ngamdu village at about 10:15 pm. The village is a border community between Borno and Yobe States, about 90 kilometers away from Maiduguri. The terrorists and the victims were heading towards Martai area in an Old Model Toyota 4 Wheel Drive with Registration Number Borno XA 625 KGG when they were intercepted at Zabarmari area by the JTF troops on special operation about 30 kilometers from Maiduguri metropolis.


Musa listed the items found in the recovered vehicle to include one AK 47 Rifle and a magazine with 30 rounds of 7.62 mm Special Ammunition, seven assorted cell phones, six pairs of wrappers and a set of lady’s shoe, seven pairs of male clothing, three MTN Sim cards, two extra vehicle’s batteries, an identity card,two jacks, a mat and two pairs of male shoes.

“The JTF wishes to once again alert the public to be wary and security conscious at all times. Members of the public are advised to avoid or be very sensitive to strangers and friends that have not been in contact for long. Similarly, the public are warned to avoid isolated areas and shun meetings or friendship organised through telephone or social media.

“This advised is based on the intelligence available to the Task Force that Boko Haram terrorists have resolved to concentrate more on kidnappings than robbery. They alleged that kidnapping is more lucrative, less dangerous and requires short time to plan and execute.

“Consequently a special kidnapping squad has been earmarked and tasked by Boko Haram to kidnap persons who could be a relation, politician, businessman/woman, civil servants, traditional rulers and foreigners alike,” Musa stated.