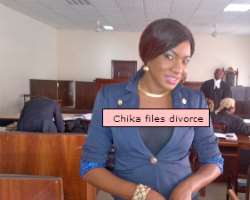 Sentiments aside, Chika Ike is worst than Stella Damasus. We all know how Stella cherished Jaiye when he was alive, they married and remained married till death separated them.

In the case of Chika, it's a different ball game, we gathered that actress Chika Ike is happy that she wants to divorce her husband, this is why she allegedly went into the court room, elegantly posed for snap shots.

I found this display kind of awkward and thought I should get people's thought on it. Before now, divorce used to be the last resort, that is after all other options have failed. But today the case is totally different. Some married people rush into divorce by merely meeting a new girlfriend or boyfriend who they think is better than their current partner

"What I observed about actress Chika Ike's divorce is that she looks happy to go for it. There are tales in the media that she's enjoying a secret affair already...

Two years after getting married to Mr Tony Eberiri she moved out of her matrimonial home, claiming that their differences are irreconcilable. But rather than look sober like someone who actually went into marriage with genuine intentions and a good heart, she was busy posing for photographs right inside the court house where her divorce case will be decided.

Probably she's in hurry to move into the arms of another man, as people are already insinuating?" a source informed us