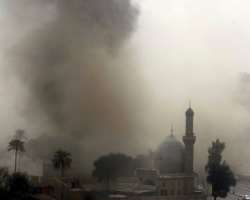 A roadside bomb killed a Sunni cleric and five worshippers when they left a mosque in Bagdhad after Friday prayers, police and medics said, as regional sectarian violence threatens to return Iraq to all-out conflict.

Iraq has become increasingly volatile as the civil war in neighboring Syria strains volatile relations between Sunnis and Shi'ites. April saw the most killings since 2008, but was below the height of sectarian bloodletting in 2006-07.

A further 31 people were wounded in the blast outside the mosque in al-Rashidiya district of Baghdad, medics said. It was not clear who was behind the attack.

Sunnis have been protesting since December against the Shi'ite-led government, which they accuse of marginalizing their minority sect and monopolizing power since U.S.-led troops toppled Saddam Hussein in 2003.

Government concessions had begun to defuse the Sunni demonstrations until security forces raided a protest camp in the town of Hawija on April 23, sparking clashes that swiftly spread to other Sunni areas.

Iraq is home to a number of insurgent groups including a local affiliate of al Qaeda, which almost entirely controlled Anbar province until 2006 and is now believed to be regrouping there again.