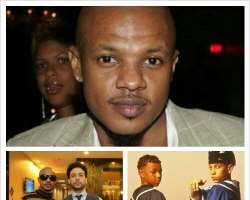 Chris "Mac Daddy" Kelly, one half of the 1990s rap duo Kriss Kross, has died at an Atlanta hospital at the age of 34, Kelly died on Wednesday evening. Kelly was found unresponsive at his home. The cause of his death is unknown, but an autopsy has been scheduled for this morning. Atlanta native Kelly and Chris Smith made up Kriss Kross, which was best known for the 1992 hit single "Jump."

May his soul rest in peace..amen!