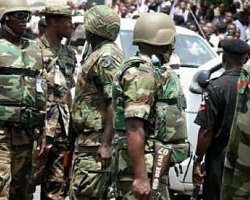 SAN FRANCISCO, May 01, (THEWILL) – The military Joint Task Force (JTF), codenamed Operation Pulo Shield, of the 19 Brigade of the Nigerian Army in Koko, Warri North Local Government Area of Delta State, Wednesday, said it engaged a group of militants known as Egbesu Force in a gun battle, destroying the militants’ camp in the process.


The army also paraded four suspected criminals whom, they said, have been terrorising the area.

One of the suspects, who simply gave his name as Kenneth Odje, from Oghara, was arrested for using military camouflage to impersonate the former Commanding Officer in Koko as well as duping people.


Another suspect whose name was given as John Tosin was arrested over illegal oil bunkering while the other was allegedly caught in possession of a local made pistol.


The militants’ camp in the creeks of Delta State has been fingered as hideouts for kidnappers, illegal oil bunkerers and those who carry attacks on oil facilities.


The destruction of the camp is coming just as five oil workers were abducted in an overnight attack on an oil platform in Bayelsa State by a relatively unknown militant group.


It would be recalled that the military recently warned that it was planning to raid suspected criminal camps in the Niger Delta but gave no details.


The onslaught on the militants’ camp is therefore the first in Delta State as nearly all militant leaders and their foot-soldiers had surrendered their arms with their camps destroyed after they agreed to embrace peace in a "cash-for-arms" amnesty brokered by late President Umaru Musa Yar’Adua began in August 2009.


It was gathered that the camp was the remnant of ex-militant warlord, 'General' Ezekiel Akpasibowei-led notorious 'Egbesu Force' which was said to have been resuscitated, fortified and expanded.

It is not however clear if 'Gen' Akpasibowei’ was behind the resurrection of the militant camp which the JTF said was confirmed to be in operation by several sources including higher military headquarters.


Commanding Officer of 19 Brigade of Sector 1 of the JTF situated in Koko, Lit-Col Frank Etim, Wednesday, said the Task Force had been monitoring intelligence report on the presence of the militants' camp in Adagbrasa/Itagbene in Warri North LGA.


Though Etim couldn't give the name of the leader of the camp, he said the camp is suspected to be that of 'Gen Ezekiel’ who was captured during the amnesty days and have been resuscitated by this group of renegades.


He said that the militant group was responsible for the abduction of three oil workers of the oil surveillance team on routine duty along the Benin River recently.


Etim said that the group had been involved in cases of kidnapping/abduction of persons for ransom, political upheaval, illegal oil bunkering, sea piracy and blockade of the Benin River which culminated with the blockade of the Adagbarasa Lagos Junction waterways.


According to Etim, consequent upon directives from higher headquarters, an operation to destroy the camp was conducted on April 27 and 28.


Etim said although only one suspect was arrested after the operation, JTF said its men encountered heavy resistance from the militants from well prepared bunkers and gun position which were reinforced with booby traps and dynamites.


He said that the militants set several booby-traps for JTF, including felling heavy logs on the waterways in order to evade arrest and to enable them escape before JTF troops got to them.


Etim who showed newsmen video recording and photographs of the camps after it was captured including a register containing some names and when they held their last meeting as well as a UBA ATM Card, and one National Identity Card, said that the militants had all fled with their paraphernalia of office before the JTF troops got to the camp.


Items recovered from the operation included a sewing machine and some ammunitions.


Etim said that the camp was eventually set ablaze after an hour of sporadic gun battle between troops and the militants in the creek.


It was not clear if there were any casualty on the part of the militants but Etim said none of his men was killed or wounded while the gun duel lasted, saying currently, a mop up exercise is ongoing in the battle ground.

"These operation was carried out professionally without any collateral damage to unarmed civilians and their communities against claims by some individuals and communities around the area that the soldiers attacked them,” Etim said.


Etim, who expressed concern over the regrouping of the militants, warned any outlawed group in the Delta to toe the path of peace, honour and diligence in order the make the environment safe for all.


While stressing that no meaning development would take place in an unsecured environment, Etim said the Task Force in tandem with the Federal Government would continue to do its best to maintain peace and protect lives and properties in the Niger Delta .


" The Battalion and Sector 1 of the JTF would continue to go after the militants and all those with burning desire for violence and criminality,” he said.