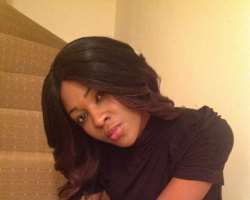 We all know that Ghana duo R2Bees have just released their latest album “Refuse to be Broke, Da Revolution II”. What we did not know however is that there is a mystery woman who seems to have been the inspiration behind Mugeez's verse, particularly the line:

The “Prim” spoke about in this song is a former beauty queen Primrose Mutsigiri. Who is also a celebrity publicist to International gospel singer Sonnie Badu, International footballer Obafemi Martins and Ghanaian renowned actor Van Vicker. Our sources have gathered that she also just launched a new initiative (Behind The Golden Smile Foundation) (FOLLOW ON TWITTER [email protected]) which is aimed at raising awareness about Iron Deficiency Anaemia, with a lot of celebrity support.

Miss Mutsigiri seems to have a very close relationship with the R2bees duo and we can't help but wonder if there is more to Mugeez's verse than just wanting a girl “Like Prim” or rather Paedae?? Going by the tweet below.