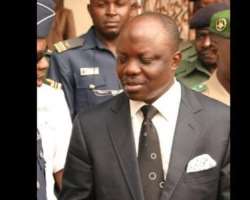 The fraud, which is being covered up by the Polytechnic Rector; Prof Andy Egwuyenga was money that could not be accounted for from the sale of admission forms to new intakes into the institution for the new academic session. According to impeccable school sources, two accountants of the institution whose names were given as Mr. Obata Augustine, Nosima, Ikechukwu (Iyk) and another bursary staff are those allegedly involved in the fraud.

THEWILL reliably gathered that the fraud was committed via some fraudulent private accounts, a situation which caused cheques issued by the school authority to bounce.

We also learnt that despite the five-man panel set up by the school authority to investigate the scam, the rector has so far tried to frustrate the exercise.

A bursary staff where the fraud was allegedly committed who pleaded anonymity confided in us that the institution's bursary department has always been a den of fraud.

A senior staff who also confided in us lamented series of fraud rocking the institution noting that nobody seems to care about it adding that external and internal audit of the school accounts carried out sometime ago indicted the Rector and some other bursary staff but the report was shelved.

Efforts made to contact those fingered in the fraud for comments proved abortive as they were not available but the principal accountant of the institution, Mr. Ajokpa confirmed there was an allegedly fraud but said he was on leave and would not comment because a five man panel has been constituted to investigate the scam.

However when the news of the presence of our reporter filtered into the rector's office, he denied our reporter access, insisting that our reporter write formally to his office before making any comment on the issue. A source hinted that the rector was restless and apprehensive over our reporter's visit and the media attention the issue has generated in state.