Where Is Mosun Filani? 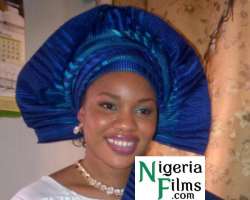 The question on the lips of the numerous fans and admirers of the delectable screen diva is, Where is one of the beautiful, few scandal-free Nollywood actresses of repute, Mosunmola Filani?

Ponder no further as the pleasant wife of admirable legal practitioner Kayode Oduoye, who earlier in the year delivered her first child, Princess Sinmilelouwa, is leaving nothing to chance in executing her motherly role to the fullest, just as she would do to a well scripted movie role, towards the perfect upbringing of her precious jewel.

Movie buffs and fans of this lovely lady who always cross the I's and dot the T's in every movie production she has been involved in just have to wait a little bit more before Mosunmola Filani comes right back into their respective faces and homes. Meanwhile, her handsome hubby, Kayode Oduoye, the former governor son, has tucked himself with the activities of Osun State's PDP so as to win the State back to the party