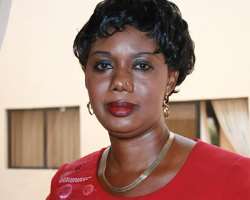 One of the charges against her read; “that you Philomena Ehirim and Alpha Charity Healthcare Service Incorporated on or about the 19th of August, 2009 at Owerri, Imo State, within the jurisdiction of the Federal High Court of Nigeria, with intent to defraud obtained the sum of N400,000 (Four Hundred Thousand Naira) by false pretence from Mrs. Rose Nkwocha, when you presented yourself as a travelling agent capable of procuring a Canadian Visa for Mrs. Nkwocha’s son, a pretence which you knew to be false and thereby committed an offence contrary to section 1 (1)b of the Advance Fee Fraud and Other Related Offences Act No.14 of 2006 and punishable under section 1(3) of the same Act”.


The accused person pleaded not guilty when the charge was read to her.

The prosecuting counsel, Abraham Abutu asked the court to fix a date for trial. However, counsel to the accused, V. O. Ehirim told the court that he has filed an application for bail dated February 19, 2013, and that he was ready to argue his application.

He further told the court that the offence was bailable and that the accused will be available to face trial Justice Oyibo granted the accused bail in the sum of N600,000 (Six Hundred Thousand Naira) with two sureties in like sum, who must be civil servants of grade level 17 and above with landed properties or businesses that are registered with the Corporate Affairs Commission.

The accused is remanded in prison custody till she fulfils the bail terms.


The matter was adjourned to 21st May, 2013 for continuation of trial.