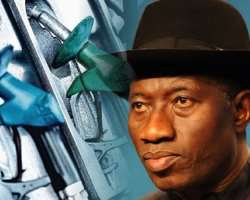 President Goodluck Jonathan recently returned to what many Nigerians believed was a settled issue. Speaking at the Nigeria Summit 2013 in Lagos, he had unveiled a platform of economic development for the country which he said was predicated on full removal of fuel subsidy. His earlier attempt to remove fuel subsidy on January 1, 2012 led to widespread protests in the country, forcing the government to partially reverse itself.

His argument against subsidy on prices of petroleum products is that it poses a huge financial burden on the nation’s lean resources, disproportionately benefits the wealthy and diverts resources away from potential investments in critical infrastructure. Jonathan’s plan on the subsidy savings has reversed the trend, taking from the few to the many, and to areas of the economy that would create jobs and empower poor Nigerians. In doing so, the improved revenue accruing to the government is now being used to service the Subsidy Re-investment and Empowerment (SURE) Programme, a vehicle he set up to ameliorate the harsh effects of the increase in petroleum products.

Though the projected per annum savings of N1.3 trillion is no longer realizable following the pegging of fuel price at N97 instead of N141 per litre of petrol which was envisaged, it was however, a rise from the previous price of N65, which still adds to government’s social infrastructure renewal impetus. And so, by declaring that his administration would push for the full deregulation of the nation’s downstream oil industry, Jonathan has, wittingly or unwittingly, triggered an argument over how well he has performed with the improved revenue accruing from the partial deregulation and the projects embarked upon in the past fifteen months.

While every State and Local Government designed their own programmes of utilizing their portions of the savings, President Jonathan determined that the Federal Government’s share would be channelled into a combination of programmes to stimulate the economy and alleviate poverty through critical infrastructure and safety net projects. Among them were the construction of some major roads and bridges in the nation’s six geo-political zones, the completion of rail routes and power sector reforms to improve electricity generation capacity.

There is no doubt that while government personnel have shown gross incompetence and a lack of capacity, inadequate funding has largely been the bane of roads development and maintenance in the country. Many key roads have been stalled by many factors, chief of which was funding, which is why the listing for maintenance/completion of the busy 200-kilometer Abuja-Abaji-Lokoja dual Carriageway, the 295-kilometer Benin-Ore-Sagamu dual carriageway, the 317-kilometer Onitsha-Enugu-Port-Harcourt dual carriageway and the 510-kilometer Kano-Maiduguri dual carriageway came as a big relief. With the expected rehabilitation and restoration of abandoned railway infrastructure and the construction of new standard gauge railway lines, the 1,326 kilometers of roads projected for completion under this programme would no doubt engender positive spiral effects all over the country. Work on all those roads has received a massive boost following improved funding while the constructions of two major bridges-the Oweto Bridge and the 2nd Niger bridge, both of which span 2 kilometers each-across the Rivers Niger and Benue is expected to be flagged off anytime from now. The East-West highway which spans a distance of about 338 kilometers across the Niger Delta and which has been executed half-heartedly for nearly a decade, has however not witnessed a similar lift.

When the President proposed to fully deregulate the oil industry from the 2012 fiscal year, there was a major adjunct to that proposal: to sanitize the oil industry by fighting corruption that has become so endemic in the nation’s economic mainstay. If, as many would argue, it is still too early in the day for a holistic assessment, a dispassionate evaluation of the steps so far taken in reforming the oil industry and dismantling the structures that have over the years sustained its cesspool of corruption will lead to the conclusion that he has remained true to his words. And by beaming the searchlight on the oil industry, he has largely proved wrong those cynics who doubted he would have the nerve and political will to go after such entrenched interests.

The probe of oil industry subsidy payments by the National Assembly has revealed corruption of earth-shaking proportions for a country in which citizens go to sleep hungry. Many believe the outcome is still like the tip of a big iceberg. The President’s decision therefore, to establish two Special Task Forces on the Petroleum industry, headed by Malam Nuhu Ribadu and Dr Kalu Idika Kalu-two men with strong political and public service pedigree-to determine and verify all petroleum upstream and downstream revenues due and payable to government and to conduct high-level assessment of the Port Harcourt, Warri and Kaduna refineries respectively must, therefore, be understood in the context of the president’s pursuit of transparency and efficiency in the industry.

The most critical of the economic challenges bedeviling the nation, however, is the lack of stable electric power supply. So profound is its crippling effect on national productivity that it has led to mass youth unemployment, collapse of not a few processing concerns and an inclement environment for the much-touted Direct Foreign Investment. Just as many believe that successive past administrations have groped in the dark in seeking lasting solutions to the power supply challenge, President Jonathan is expected to break the jinx, given the power sector reforms and additional funds to back it up.

The power component of SURE programme dedicated specifically to selected power projects is soon expected to deliver the Mambilla hydro-power project to provide an additional 2,600MW of electricity. Some of the 17 small and medium hydro-electric power projects with a cumulative capacity of 140.275MW, also being funded through SURE, have already been delivered while others are at advanced stages.

Like it happened when the idea of subsidy withdrawal was first mooted in 2011, reactions to the plan to revisit the issue have been mixed. While many expressed the opinion that it would further conserve needed funds for the country’s critical needs, others have faulted it on the basis of Jonathan’s perceived inability to call the cartel manipulating the oil industry to order. The Congress of Nigerian Political Parties, CNPP, has been consistent in peddling this biased viewpoint.

That the nation has gained immensely from savings from the 2012 partial subsidy withdrawal is not in question. Though Nigerians paid nominally more-because petroleum has a ripple effect on the economy-the drawdown on the positive side of the economy far outweighs the negative. That will always be a good argument for full withdrawal, but whether Nigerians are prepared now or in the near future for higher prices for petroleum products must be considered along with other factors. In any event, the populace needs to continue what it has done tenaciously in the past: highlighting its implications to government, and insisting they are addressed. Has the government not done well with addressing infrastructure decay with the money saved from partial deregulation? If it has, as I believe, why should we vote for deployment of more funds from full deregulation? This is the time to debate this issue with a view to aggregation national consensus for or against this policy.