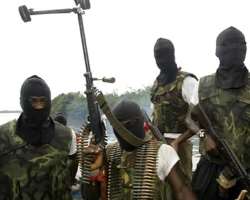 SAN FRANCISCO, April 06, (THEWILL) – It was really a bloody weekend as not less than 31 persons, including 13 policemen, were killed in three states across the country.

Former militants of the proscribed Movement for the Emancipation of Niger Delta (MEND) sent 13 policemen to their early graves in a horrific manner in the early hours of Saturday, in Azuzuama in Southern Ijaw Local Government Area of Bayelsa State, thus making good their threat to resume sporadic attacks in retaliation of the jail sentence recently handed to its leader, Henry Okah, in South Africa.

The Bayelsa killings also came on a day unknown gunmen suspected to be rampaging Fulani herdsmen operating in large numbers unleashed terror on Karkashi village in Langtang South Local Government Area of Plateau State, killing seven persons in a raid which left many others with varying degrees of injuries.â€¨

Also on the same day, the home of the Adamawa State deputy governor, Mr. James Bala Ngilari, was attacked by unknown gunmen who killed his close relative and a security guard while nine other persons were killed in the village by the hoodlums who also made away with valuable properties.

The unfortunate policemen in Bayelsa were said to have been shot gruesomely murdered as they were shot at close range while on an official assignment at the burial ceremony of the father of a former militant leader who is currently a senior special adviser on Marine Waterways to the Bayelsa State governor.

Confirming the killings, the state Commissioner of Police, Kingsley Omire, who addressed journalists on the matter, said 15 policemen were on official assignment before they were ambushed by the ex-militants. He, however, denied that 13 members were killed, saying only four policemen were rescued while 11 were still missing .

Meanwhile,unknown gunmen suspected to be rampaging Fulani herdsmen operating in large numbers unleashed terror on Karkashi village in Langtang South Local Government Area of Plateau State, killing seven persons in a raid which left many others with varying degrees of injuries.

Residents of the village said the same gunmen also attacked Zango village in Wase Local Government Area and set many buildings on fire. They were however said to have been repelled by the villagers who killed four of them.

Spokesman of the Special Task Force in charge of security in the state, Captain Salisu Mustapha, who confirmed the killing, said the gunmen stormed the village in the early hours of Saturday and killed seven people and injuring many others. He however said four of the rampaging hoodlums were arrested and were being interrogated to know the level of their involvement.

In Adamawa State , the home of the deputy governor, Mr. James Bala Ngilari, was attacked by hoodlums who killed his relative as well as his security guard before moving into the village to kill nine other persons as they made away with valuable properties.


Sources said the hoodlums had attempted to force their way into the deputy governor’s house without success but succeeded in locating his relative who lives in another house in Madagali town.

The relative, who was later killed along with the security man, was forced to lead the hoodlums to the deputy governor’s private residence where he directed them to open the main gate to the house while the assailants ransacked the house and made away with valuable properties.