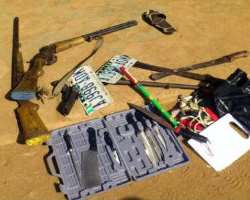 SAN FRANCISCO, April 02, (THEWILL) – The last is yet to be heard of the fracas between members of the Action Congress of Nigeria (ACN) in Ekiti State last Saturday as the Secretary to the Ekiti West Local Government Caretaker Committee, who is also the immediate past Special Assistant (Political) to Governor Kayode Fayemi, Mr. Tai Oguntayo, and 12 others were, Tuesday, arraigned before Magistrate Soji Adegboye of the Ado-Ekiti Magistrate Court One on a two-count charge of illegal possession of firearms and conduct likely to cause breach of public peace.

Oguntayo and 12 others were arrested last Saturday following the free-for-all between his faction of the party in Okemesi-Ekiti and that of Hon. Kayode Fashakin, a member of the State House of Assembly. He was alleged to have led thugs to unleash terror on Fashakin’s supporters during which three persons were said to have sustained serious injuries.

Five guns were said to have been allegedly found at his official residence at the Local Council Guest House, Aramoko Ekiti, thus prompting his arrest and arraignment.

However, the court granted bail to the accused on the condition that they provide two sureties.