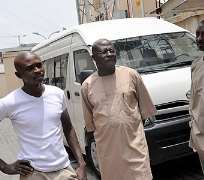 The accused persons, who pleaded not guilty to the charges, were alleged to have conspired to falsely present themselves as officers of EFCC who are investigating the accounts of Benue State Local Government and had sought for the sum of three million US Dollars to “kill” the case.

In a bid to actualize the scheme, one of them, Bulus Ashom Agom, who was dismissed from the Nigerian Police Force in June 2012, was alleged to have forged a Nigerian Police warrant of arrest card no 35231 which he presented to the governor.

Thereafter, Governor Suswan alerted the Department of State Security, DSS which arrested and handed them over to the EFCC. It was at EFCC office that Bulus and Nuhu Bawa Attangs made statements that led to the arrest of others.

Having taken their plea, Prosecution Counsel, J.O Uzor, asked that they be remanded in prison custody and requested for a date to commence trial. This was opposed by the defence counsel, E.A. kume for the first accused and Izang Aware for the second, third and fourth accused persons.

Justice Kpojime however granted bail to the accused in the sum of N200, 000 each and a surety in like sum. He said that the surety must be a civil servant in the service of Benue State Government who must not be less than grade level 12. He further said that all sureties and accused persons must deposit their passport photographs. The case was adjourned to May 15, 2013 for trial.

Count one of the six count charge reads: “That you Mark Gbaa, alias Nasiru Nasamu, Ezekiel Ajik Azi, Bulus Ashom Awom and Nuhu Bawa Atangs between January and February 2013, at Makurdi, within the jurisdiction of the High Court of Benue State with intent to defraud, conspired to obtain the sum of three million United States Dollars ($3,000,000) from one Hon. Gabriel Suswan, the Executive Governor of Benue State, when you falsely presented yourselves as officers of Economic and Financial Crimes Commission, who were investigating the Benue State Local Government Account and other pending cases which representation you knew were false and thereby committed an offence contrary to Section 8 (a) of the Advance Fee Fraud Act and other related offences Act no 14 of 2006 and punishable under Section 1 (3) of the same act”.