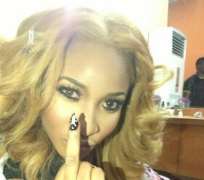 When the news of Tonto Dike being heartbroken a while ago, a lot of her fans pitied her and asked her to move on and forget about it. But, it seems Tonto, who has the heart that got broken, never felt anything about it.

She recently tweeted that “but for what its worth, might I add that it's no big deal to be heartbroken as it won't make you any less of a person that you already are.”

This simply means the people should not bother to pity her. Case close