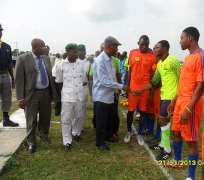 As part of the activities marking the 79th birthday of the Proprietor, Crescent University, Abeokuta as well as the 7th Founder's Day of the institution, the Team Crescent in a home friendly match defeated Team Fountain 3 goals to nill.

The Crescent University Proprietor described the victory as his birthday gift especially since the coach of the Team Fountain was the former coach of Team Crescent.

In highly interesting match, the Team Crescent scored its first goal in the 17 minutes of the first half with a beautiful conversion by number 11 jersey, Dayo King. The second goal was a pull-out from the left flank in the 58 minutes of the second half while the third goal scored through the right flank by jersey number 2, Ridwan Abiola.