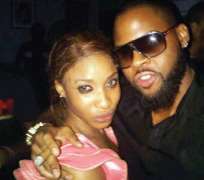 Remember I told you guys some days back that controversial actress Tonto Dike was heart broken by her sweet boyfriend. Well, the saga continues.

Pictured above with Tonto is the guy who did it. His name is Caporahvenwah Okolie, popularly known as Chief Capo. He is an international model, rapper and singer. A source said Tonto caught him on top another lady in his home and they fought...

This led to their break up. From what I hear, Caporahvenwah is good looking, rich and not ready to settle down yet since there are so many women "available" to him. He has a home in Atlanta and also owns a record label known as G-Muzik Entertainment.

Recall that Tonto Dike had bragged that she doesn't like Igbo guys, but this guy's mum is South African while his dad is a Nigerian from Igbo.

Below are confirmation tweets from Caporahvenwah, also known as 2G:

Quote of the Day From Joke Silva