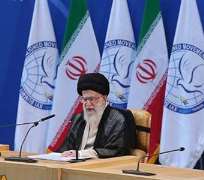 Iran's clerical supreme leader said on Thursday the Islamic Republic would destroy the Israeli cities of Tel Aviv and Haifa if it came under attack from the Jewish state.

"At times the officials of the Zionist regime (Israel) threaten to launch a military invasion but they themselves know that if they make the slightest mistake the Islamic Republic will raze Tel Aviv and Haifa to the ground," Ayatollah Ali Khamenei said in an address to mark the Iranian new year.

Israel has threatened military action against Iran unless it abandons nuclear activities which the West suspects are intended to develop nuclear weapons. Tehran denies this, saying it wants nuclear energy only for civilian purposes.

In his televised speech, Khamenei said Iran's struggles over the past year against international sanctions imposed over its disputed nuclear program resembled a battle and that its enemies had confessed to trying to "cripple the Iranian nation".

"What happened last year, we need to learn a lesson," he said, alluding to what he described as Iran's significant scientific and military advances. "This vibrant nation will never be brought to its knees."

Khamenei also called for Iran's "natural right" to enrich uranium for nuclear energy to be recognized by the world. Western powers have refused, saying Iran has hidden nuclear work from U.N. inspectors and stonewalled their investigations.

Talks between Iran and six world powers - the United States, China, Russia, Britain, France and Germany - are to resume early next month in a further attempt to strike a deal on Iranian nuclear aspirations.

But Khamenei was cool to a U.S. suggestion of direct talks between the two countries, which severed diplomatic relations after Iran's 1979 Islamic Revolution.

"I am not optimistic about these talks. Why? Because our past experiences show that talks for the American officials do not mean for us to sit down and reach a logical solution ... What they mean by talks is that we sit down and talk until Iran accepts their viewpoint," he said.

"Iran only wants its enrichment right, which is its natural right, to be recognized by the world."