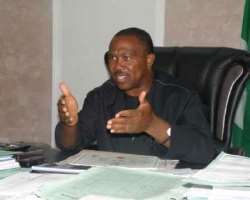 San Francisco Feb 06, (THEWILL) - Major candidates in the Anambra gubernatorial election of Feb 06 complained about various irregularities including doctored voters lists with names like Nelson Mandela and Bola Ige appearing in the register, late arrival of electoral materials and disappearance of eligible voters names from the register.

Incumbent Governor, Peter Obi refused to cast his vote because a lot of members of his constituents could not find their names on the register.

"I am not happy at all, and don't see why I should vote while several thousands of people are unable to vote, he said."

The success of the Anambra election is crucial to Nigeria's electoral reform as it begins a circle of state and federal elections due in 2011.

There is also the issue of the Lagos high court judgment which said the electoral commission as currently composed was not competent to conduct elections in the country. Analysts have said that any of the candidates could easily use the judgment to challenge the election in court.

INEC in its defence said it was yet to receive the court order so the election would go on.