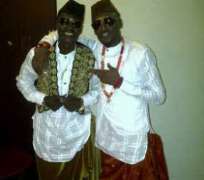 Two Festac, Lagos-based singers; 2Face Idibia and Sound Sultan, are not set to debut their comic TV series titled 'Who Be Mumu.' The duo are due to air the soap on terrestrial television stations in Nigeria soon after the necessary arrangements are concluded.

The comic series is co-produced by the two artistes and they will only feature in the series as guest artistes alongside some other Nigerian celebrities.

We gathered that the series tells stories of an average youth in Nigeria highlighting the challenges faced by them.

No date has been fixed yet for the series to hit the silver screens. Most of the shots will be taken from their Festac neighbourhood.