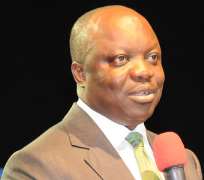 Dr Uduaghan who performed the inauguration in Asaba implored the new council to focus more on educational programmes in the university and ensure the programmes were in line with National and International standards.

He also enjoined the council to shun all ethnic tendencies, check cultism, drugs and anti-social activities by students.

While explaining that it was only under an atmosphere of discipline and peace that progress could be made in the university, the governor urged the Governing Council to come up with effective strategies that could make for peace and harmony in the institution.

His words ‘’The vision of this administration is to develop a world class institution that can compete favourably with similar institutions globally, so I charge you to focus greater attention on teaching, peace, research, training and community service’’.

Dr Uduaghan who described the ceremony as significant and emotional was optimistic that members of the council would live up to expectation and make meaningful progress.

He said the education sector was a critical one even as explained that members of the council were carefully chosen because of the current trend in the development of the education sector which required academic depth, best hands in business management in order to move the institution to a glorious height.

The governor appealed to stakeholders especially staff, students and the host communities to ensure that everything was done to make the institution the best in the world.

Dr Uduaghan reiterated his administration’s preparedness to impact positively on human capital development and would consequently be consistent in improving education at all levels.

Reminding the council the challenges facing the education sector in the state he put it this way ‘’Universities have challenges and as such you should have the capacity to transform the institution especially in the area of infrastructures and academic excellence’’.

Responding, the Chairman of the Governing Council Mr Tony Elumelu promised that they would turn the institution into a citadel of modern university.

Mr Elumelu who promised that they would not let the state government down, described the governor as a humble, wonderful and industrious person who has great passion to develop the state.

He promised not to betray the confidence placed on them and expressed appreciation to the state government for the opportunity given them to serve.