PDP To Embark On Reconciliation Tour 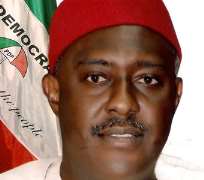 SAN FRANCISCO, March 14, (THEWILL) - In line with the reconciliation, reformation and rebuilding agenda of the the Peoples Democratic Party (PDP),Chairman, Alhaji Bamaga Tukur and the first year anniversary of the National Working Committee (NWC), the party has announced that it will be embarking on a nationwide tour of the six geo-political zones in the country.

In a press conference held at the office of National Publicity Secretary, Chief Olisa Metuh, the party said the tour will be inclusive and involving all members of the party.

“With the approval of the Chairman’s Triple “R” (Reconciliation, Reformation and Rebuilding) agenda by the National Executive Committee (NEC) and the final articulation of the agenda, the leadership of the party will undertake a tour of the six geo-political zones to commence the implementation of the processes,” Metuh said.

The tour is targeted at executive governors in the zones; zonal executive committee of the party, party elders and other prominent invitees including women and youth groups.

The tour will commence on Friday, March 15th and end on Sunday March 24th 2013 at the International Conference Center in Abuja. The grand finale will coincide with the first anniversary of the NWC, Metuh announced in his statement.

Plans have also been concluded for the launching and unveiling of the new PDP website/portal together with highly active and interactive social media platforms including facebook and twitter accounts in order to reach out to every Nigerian about the activities of the party, Metuh added.

He gave the web addresses and accounts as;
Website: peoplesdemocracticparty.com.ng
Facebook: officialpeoplesdemocraticparty
Twitter: @pdpnigeria
In his response to enquiries from members of the press, the PDP spokesman gave assurances that the tour is necessary for the party as a measure to unify members to come together under the umbrella of the party to adequately face the enormous task ahead.

“We expect that we would be able to preach peace and let the spirit of unity get to our followers and members so we can work in one accord. Yes we are faced with the opposition; whether the opposition is organized or is strongly more in the media or propaganda is not important. What is important is that our party should be more focussed together, more united to deliver on the mandate that has been given to us in serving Nigerians,” he said.

“We will not be placing any condition to the reconciliation exercise. Every member is expected to be reconciled as long as they are qualified to be a member under our constitution; this tour cannot override the provisions of the constitution. We are not a lawless body but law abiding people.”

On the issue of the state pardon granted to some citizens by the Federal Government, the National Publicity Secretary said that the issue has not been discussed with the NWC of the party.

“It is easy enough to see that this briefing is not about Alamieyeseigha but I must inform you that the NWC has not discussed this issue. As other Nigerians, we have been informed about the decision of the Federal Government and as such, the party will not comment on the issue,” he cleared.

Metuh went on to clear the air surrounding some rumours from the opposition insinuating a divide in the PDP Governors Forum following the absence of some state governors in their inaugural meeting as baseless saying that attendance to a meeting cannot be used to judge commitment.

“The PDP is completely in support of the Governors Forum. We are aware that the PDP governors yearned for the formation of a group that has the interest of the party at hand. We have given them their request and they have the party’s support. Attendance to a meeting does not judge commitment; some of the governors travelled and so could not be present at the meeting.”

On the issue regarding the accusations by the opposition that PDP was behind the move to register another party, Metuh dismissed that as the ranting of a group that is incompetent, disorganized, lacks foresight and an agenda.

“We are happy that Nigerians are seeing the crop of people ranting that they would want to wrestle power from the PDP; they have never come up to tell Nigerians what plans they have for the country, what their agenda is and so forth. But they went on a jamboree making noise without even doing the basic process of registering their party. The PDP is a focused party and we do not have a hand in their carelessness. Their actions goes a long way to showing how disorganized they are.”