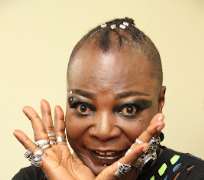 "The abductors have finally killed my cousin, Emeka, may your soul rest in peace. I thought you would return but I waited in vain, rest in peace bro."

The above statement was culled from Charles Oputa's twitter timeline about his late cousin who was Kidnapped and eventually murdered by kidnappers inspite of ransom paid.

Nollywoodgists.com and its management commiserate with the weird one, Charly Boy on the death of his cousin, Emeka, may God give you the fortitude to bear the irreparable loose.