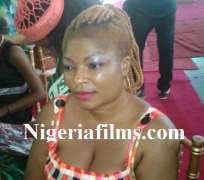 The lady popularly called Asake, who runs a well known pub called Asake at Joel Ogunnaike is dead. The beautiful woman died at the emergency section of Ikeja General Hospital late two nights back at about 9pm.

Though, the lady was said to have had series of attack spiritually and otherwise, her skin, which was bleached to her veins, couldn't have extended her life span.

Information has it that Asake, who started bedridden months ago, was said to have died of stroke though, another section of the report has it that it's not just stroke but the deadly and the globally fearful ailment.

http://www.nollywoodgists.com gathered she had series of love affairs with quite a large number of guys in the media, entertainment industry, financial institutions, nightclub business , Force services, transportation business to mention a few.

Their names? We shall make it available as soon as the list is compiled.