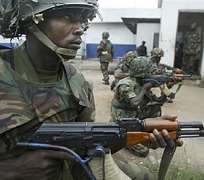 Apparently buoyed by the support given to JTF by the President, who also slammed the Borno elders for encouraging the insurgency, the soldiers embarked on a massive manhunt for the Islamic fundamentalists, combing every nook and cranny of the town, killing 52 Boko Haram members, including 10 commanders of the sect and arresting 72 other members in the operation.

The JTF also lost two personnel and had three others injured and recovered perhaps the largest cache of arms and ammunitions from the sect members in a single attack since the operation commenced about two years ago.

It would be recalled that the president had thrown his weight behind the military during his two days visit to the Boko Haram invested states of Yobe and Borno, telling the stakeholders in Yobe State who had requested for amnesty for the sect members during a town hall meeting that he regarded members of the terrorist group as ghosts, and cannot grant amnesty to ghosts.

In Borno, he lampooned the stakeholders who had in addition to the request for amnesty, asked for the withdrawal of the soldiers from the streets. He told them that they were playing to the gallery and should be ready for the pains associated with the crisis since they have decided not to come out openly to condemn the insurgency.

The president had also told them that he does not take lightly to the continued killing of military and security personnel by the sect.

And in a show of loyalty and appreciation of support to the President who departed Maiduguri for Abuja at about 12.30 pm on Friday , the JTF went about smoking the insurgents from their hiding places few hours later between 3-8pm.

The attack according to residents of the area was reminiscent of those in action-packed movies as grenades, bombs and bullets were employed by both combating teams and, at the end of the battle that lasted over two hours, corpses littered everywhere.

Confirming the incident in a statement Saturday, the spokesman of the JTF, Lt. Col. Sagir Musa, said "Based on information and intelligence report, series of operations were conducted by the Joint Task Force Operation Restore Order in the last 10 days in Borno State.

"The latest was the one conducted at Bulabulin, Bayan Quarters and Jajeri in Maiduguri metropolis between 3 – 8 pm yesterday, Friday, 8 February, 2013. During these operations, there were exchange of fire that led to the death of 52 Boko Haram terrorists including 10 commanders of the sect. 70 terrorists were also arrested. In the period under review, the JTF lost two personnel, three were wounded and no civilian casualty was recorded."

Other items recovered, according to Musa, included 33 AK 47 magazines, 11 FN magazines, three G3 magazines, 11,068 assorted ammunitions, two technical vehicles with mounted anti-aircraft stands, a box of weapons cleaning kit, four swords and two knives, five walkie talkies, four VHF hand held sets, a Multi Links router and assorted uniforms and kits. Musa said the success of the siege was as a result of information from the members of the public particularly the JTF's moles in the Boko Haram’s camp. He called for continued assistance for the Task Force through credible and timely information.