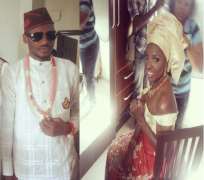 Governor Godswill Akpabio of Akwa-Ibom State has given the newly married celebrity couple, 2Face Idibia and Annie Macaulay a wedding gift.
The governor, who was present at the pre-wedding party held in honour of the couple on Thursday in the state, gave a Prado SUV gift to them on their traditional wedding held yesterday.

He also promised to send a 30-man delegate to Dubai for an exclusive white wedding to be held later in the month for the couple.

The governor has not hidden his affection for 2Face Idibia and his wife, Annie Macaulay, who hails from Akwa-Ibom.

The couple's wedding is presently one of the most talk about weddings in town.