Nollywood actor on the run over alleged N20m fraud 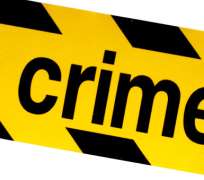 THE police are on the trail of a Nollywood actor (name withheld), alleged to have masterminded a N20 million fraud in a freight forwarding company

Vanguard gathered that the Nollywood star allegedly perpetrated the act over several months because of his strategic position in the company which gave him access to vital documents and account details of many clients.

The Nollywood star was said to be the account officer of a particular 'big client' of the firm, a position which made him to be privy to outflow and inflow in that particular account.

From this position, the actor allegedly received cheques of various sums, which he allegedly diverted to private interests through a microfinance bank with allegedly connivance of officials of a commercial bank in Lagos.

Police sources, however, told Vanguard that the bubble burst when the company embarked on a comprehensive audit of its 2012 books.

Our source at the Apapa Area Command of the Police who pleaded anonymity disclosed that the matter is still under investigation, but he confirmed that, when the Police went after the said staff of the company at Aboru in Ipaja, a Lagos suburb, but the actor was said to have moved out.

He was however traced to the new hiding place where Police reportedly met the family members who also claimed not to know his whereabout.