Davido Shares Picture Of Dad At 56 With Siblings 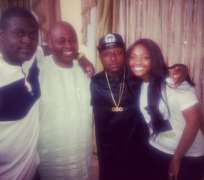 Music star, Davido has released a picture showing his dad and siblings. The singer announced that his father, Deji Adeleke, who is a billionaire businessman, turned 56 few days ago.

Davido's is reported to have the backing of his dad for his music career which has now gained astronomical growth.

Recently, reports went viral that the singer's dad insisted that his son must obtain a first degree, a decision we heard the 20-year-old star is not against.