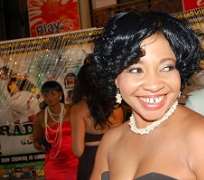 The beautiful actress was unveiled recently at NAMA's headquarters in Lagos. The agency disclosed that the choice of Benita was borne out of the good name the actress enjoys in the industry.

The agency then hoped the sultry actress would boost NAMA's brand positively.