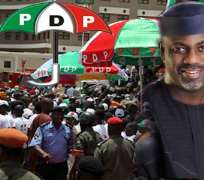 SAN FRANCISCO, March 02, (THEWILL) – The return of Governor Liyel Imoke of Cross River State to the country after some months abroad for medical treatment has been welcomed by the ruling Peoples Democratic Party (PDP).

In a statement signed PDP National Publicity Secretary, Chief Olisa Metuh, Friday, the leadership of the party said the Cross River governor who is also a member of the party was missed while away, stressing that the party is now happy that he is back on the saddle.

The statement said Imoke, who used part of his 10 years accumulated leave for medical treatment is now fully recharged and refilled to continue the good works he has been doing in Cross River State.

"The leadership of the Peoples Democratic Party (PDP) welcomes the Executive Governor of Cross River State, Senator Liyel Imoke back to the country after his 10 years of accumulated leave.

"The PDP family missed the governor while he was away but we are now elated that he is back on the saddle. We are happy that after his thorough medical check, the governor is now fully recharged and refilled to continue the good works he has been doing in the state,” the statement said.

Expressing gratitude to the Cross River State government functionaries, including the acting governor, the leadership of the party in the state, the state House of Assembly and other political office holders for their loyalty and commitment in ensuring the smooth running of the state during the absence of the governor, the party also hailed Cross Riverians and, indeed, all Nigerians for their prayers for the governor even as it restated the commitment of the PDP led- administration to continue to focus on the welfare of all Nigerians at all times.