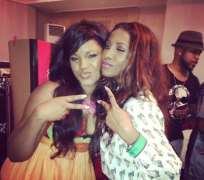 For a long time now spanning several years, the tale in town has always been that Nollywood's top two actresses, Genevieve Nnaji and Omotola Jalade-Ekehinde are at daggers drawn.

Even though they have co-starred in several movies, the bitter tale wouldn't go away.

Even when they came out separately and at different times to refute that there was bad blood between them, that even though they were not the best of friends but they were not enemies, the dirty rumour persisted.

The two divas might finally have respite from the tale now with their public display of friendship during the week at Omotola's 35th birthday celebration in Lagos.

Not only did Genevieve attend the party, she and Omotola hugged tightly, cut the cake together and were generally a bit intimate.

Does one need any further proof that the two sexy, beautiful, attractive, ambitious and successful ladies are not enemies?