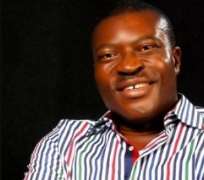 KOK, as the talented actor is fondly called, was born on March 1, 1962 in Mbaise, Imo State, same place as Rita Dominic and Genevieve Nnaji.

His movie role in the acclaimed first Nollywood home video, 'Living In Bondage' in 1992, has contributed to KOK's success in Nollywood.

He is a 2006 AMAA winner. He has starred in countless number of films. His attempt into mainstream Nigerian politics failed when he vied for the House of Reps post in 2011.