Court Says Jonathan Is Eligible To Run In 2015 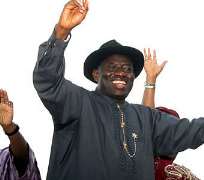 SAN FRANCISCO, March 01, (THEWILL) – An Abuja High Court ruling Friday afternoon has cleared the way for President Goodluck Ebele Jonathan to contest the Presidential election in 2015, if he so desires.

The Court presided by Justice Oniyangi, said the President’s assumption of office in 2010 following the demise of then President, Umaru Musa Yar’Adua, after a prolonged ailment was inline with the National Assembly’s ‘Doctrine of Necessity’ and not because he emerged winner of a Presidential bye election conducted after the late president’s death.

Delivering his ruling in a suit filed by Mr. Cyriacus Njoku, challenging the President Jonathan’s eligibility to contest the Presidential election in 2015, the court ruled that the Plaintiff lacked the locus standi to sue the President.

"After the death of Umar Yar'Adua, there was no election or bye election, President Jonathan was merely asked to assume the office of the President in line with Doctrine of necessity. He was not elected as the President but was made to assume office by virtue of Yar'Adua's death.

“Having exhausted the late President's tenure, he sought for his party's ticket and ran for the office of the President successfully in 2011 general election. He is therefore currently serving his first tenure of office and if he so wishes, he is eligible to further seek his party's ticket through the party's primary election and to run for office in 2015," Justice Oniyangi said in his ruling, adding that President Jonathan’s tenure as President started in May 29, 2011, when he took the oath of office and not on May 6, 2010, when he assumed office after Umaru Yar’Adua’s demise.