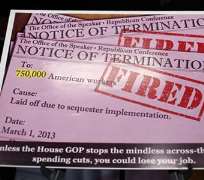 The U.S. government hurtled on Friday toward making deep spending cuts that threaten to hinder the nation's economic recovery, after Republicans and Democrats failed to agree on an alternative deficit-reduction plan.

Locked in during a bout of deficit-reduction fever in 2011, the time-released "automatic" cuts can only be halted by agreement between Republican lawmakers and the White House.

That has proved elusive so far.
Both sides still hope the other will either be blamed by voters for the cuts or cave in before the worst effects - like air traffic chaos or furloughs for tens of thousands of federal employees - start to bite in the coming weeks.

Barring any breakthroughs in the next few hours, the cuts will begin to come into force at some time before midnight on Friday night. The full brunt of the belt tightening, known in Washington as "sequestration," will take effect over seven months so it is not clear if there will be an immediate disruption to public services.

Democrats insist tax increases be part of a solution to ending the automatic cuts, an idea Republicans reject.

"We should work together to reduce our deficit in a balanced way - by making smart spending cuts and closing special interest tax loopholes," Obama said on Thursday.

Congress can stop the cuts at any time after they start on Friday if the parties agree to that. In the absence of any deal at all, the Pentagon will be forced to slice 13 percent of its budget between now and September 30. Most non-defense programs, from NASA space exploration to federally backed education and law enforcement, face a 9 percent reduction.

The International Monetary Fund warns that the cutbacks could knock at least 0.5 percentage point off U.S. economic growth this year and slow the global economy.

ITCHING FOR A FIGHT?
Despite dire predictions that the budget cuts will jeopardize 750,000 jobs, rank-and-file Republicans and Democrats sounded as if they were itching for this fight to play out.

The public, Terry said, is "being told ... that Armageddon occurs on Saturday: You're never going to fly, you can't buy any meat at a grocery store, every illegal alien is going to be released, that our borders are going to be overrun by terrorists and al Qaeda will establish themselves in every city of the United States if this goes through."

Terry said Republicans "want the cuts" to trigger, but with more flexibility on how they are carried out.

Even some Republicans keen to rein in government spending are wary of sequestration because of its potential to cause pain. The cuts are designed to hurt by hitting a wide range of government programs whether cost reduction is warranted or not.

Liberal Democratic Representative Ed Markey of Massachusetts predicted a political victory for Obama in the days after the spending cuts are triggered.

He likened this fight to a Republican-led U.S. government shutdown in late 1995 and early 1996.

At the time, Markey said, "President Clinton began explaining the government and how it serves each part of the needs of American families and Republicans lost that debate and they're going to lose the debate again this time."

Markey said Obama too will have an opportunity to lay out the benefits of public services to Americans skeptical of big government. "The government is Medicare, it's Head Start (for pre-school kids), it's protecting the safety of food, it's ensuring that children are educated," he said.

DISEASE RESEARCH, WEAPONS HIT
If the cuts were to stay in place through September, the administration predicts significant air travel delays due to layoffs of airport security workers and air traffic controllers.

Some Pentagon weapons production could grind to a halt and the budget cuts would ripple through the sprawling defense contracting industry.

Meat inspections could get hung up, medical research projects on cancer and Alzheimer's disease canceled or curtailed and thousands of teachers laid off.

Instead of these indiscriminate cuts, Obama and Democrats in Congress urge a mix of targeted spending cuts and tax increases on the rich to help tame the growth of a $16.6 trillion national debt.

Republicans instead want to cut the cost of huge social safety nets, including Social Security and Medicare, that are becoming more expensive in a country with an aging population.

Meantime, Obama is edging closer to having to enforce the meat-axe approach.

By midnight, he is required to issue an order to federal agencies to reduce their budgets and the White House budget office must send a report to Congress detailing the spending cuts. In coming days, federal agencies are likely to issue 30-day notices to workers who will be laid off.

Despite warnings that it had little flexibility on executing the cuts, White House budget office controller Danny Werfel outlined some steps that could come before major program cuts are instituted.

Federal travel, conferences and training classes could first be canceled, he said, as could worker bonuses and new hiring. Agencies have also been instructed to identify contracts and grants that could be canceled or delayed.

Even so, the process has already generated uncertainty among businesses that work with the federal government, as well as throughout the agencies that run Washington.

Referring to the partisan battles that have dominated budget fights for two years, Republican Representative Scott Rigell told Reuters: "This reminds me of a couple of crocodiles in a death grip underwater and they're running out of oxygen and we're all going down" with them.

Rigell's eastern Virginia congressional district has the highest concentration of active-duty military personnel in the country and houses major Pentagon shipbuilding facilities that could come under the budget axe.