Prezzo Might Not Be Allowed To See Goldie Harvey's Corpse 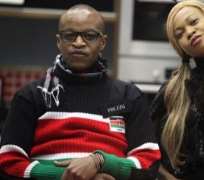 As things stand now,Kenyan rapper, Prezzo may not be 'allowed' to see the corpse of his beloved friend, Goldie, if the threat made by the songstress' husband, Andrew Harvey is anything to reckon with.

During the week, Malaysian based Briton, Harvey who happens to be legally married to Goldie and also, an administrator on Goldie's official facebook page, warned Prezzo never to bother to attend Goldie's funeral rites. He accused the Kenyan rapper of causing a lot of pain to the family.

However, following the threat, Prezzo during the week returned to his country. Those in the know said, he made his flight booking last Monday.

Andrew claimed that he agreed with Goldie to keep their affair private but the mere fact that she had publicly moved on with Prezzo left much to be desired. Prezzo, Goldie and Channel O TV presenter, Denrele Edun were in the final stages of launching their reality show dubbed 'Tru Friendship' but all this has been dealt a blow.

4Sho 4Shizzy star had travelled to Nigeria to spend a late Valentine's night with Goldie but unfortunately, that was the very day she passed on. Prezzo was speechless until the following day when he penned down a poem as a tribute to his dear friend he met in the Big Brother Africa house.

Goldie's death brought Andrew Harvey to the limelight with pictorial evidence of their 2005 Wedding which was followed with a warning to Prezzo to leave “him and Goldie's family to mourn in peace as he had caused us lot of pain.”