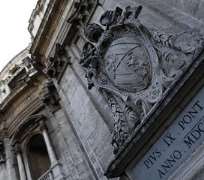 Pope Benedict may change rules governing the conclave that will secretly elect his successor, a move that could move up the global meeting of cardinals who are already in touch about who could best lead Catholics through a period of crisis.

The Vatican appears to be aiming to have a new pope elected and then formally installed before Palm Sunday on March 24 so he can preside at Holy Week services leading to Easter.

The rule changes could mean that the conclave in the Sistine Chapel, where cardinals will choose the next leader of the 1.2 billion member Roman Catholic Church, might be able to start before March 15, which is currently the earliest it can begin.

Father Federico Lombardi, the Vatican spokesman, said on Wednesday that Benedict, who will lose all power when he abdicates on February 28, was considering issuing a "Motu Proprio," a personal document which has the force of Church law and addresses a specific need.

A 1996 apostolic constitution by Pope John Paul stipulates that a conclave must start between 15 and 20 days after the papacy becomes vacant, meaning it cannot begin before March 15 under the current rules given Benedict's date to step down.

Some cardinals believe a conclave should start sooner than March 15 in order to reduce the time in which the Roman Catholic Church will be without a leader at a time of crisis.

Benedict's papacy was rocked by scandals over the sex abuse of children by priests in Europe and the United States, most of which preceded his time in office but came to light during it.

His reign also saw Muslim anger after he compared Islam to violence. Jews were upset over his rehabilitation of a Holocaust denier. During a scandal over the Church's business dealings, his butler was convicted of leaking his private papers.

Benedict and his predecessor made sure any man awarded a cardinal's red hat was firmly in line with key Catholic doctrine supporting priestly celibacy and Vatican authority and opposing abortion, women priests, gay marriage and other liberal reforms.

Cardinals worldwide have begun informal consultations by phone and email to build a profile of the man they think would be best suited to lead the Church through rough seas. Some 117 cardinals under age of 80 will be eligible for the conclave.

CONCERNS ABOUT EARLY CONCLAVE
But some in the Church believe that an early conclave would give an unfair advantage to cardinals already in Rome and working in the Curia, the Vatican's central administration.

"A short period before a conclave helps the curial cardinals in Rome operating on their home turf," said Father Tom Reese, senior fellow at the Woodstock Theological Center at Georgetown University and author of several books on the Vatican.

There is speculation in the Vatican that, if the rules are amended, the conclave could start on March 10, lasting a few days, and the new pope could be installed on March 17, both Sundays. But much would depend on the length of the conclave.

During the conclave, cardinals live in a residence inside the Vatican and vote twice in the Sistine Chapel. They are not allowed to communicate in any way with the outside world, nor are they allowed to listen to radio, watch television, make phone calls or use the internet.

Benedict has hand-picked more than half the men who will elect his successor. The rest were chosen by the late Pope John Paul, a Pole with whom the German pope shared a determination to reassert a more orthodox Catholicism in the new millennium.

A number of cardinals have said they would be open to the possibility of a pope from the developing world, be it Latin America, Africa or Asia, as opposed to another from Europe, where the Church has lost credibility and is polarized.

"I can imagine taking a step towards a black pope, an African pope or a Latin American pope," Cardinal Kurt Koch, a Swiss Vatican official who will enter the conclave to choose the next pope, told Reuters in an interview last week.

One, the 1996 apostolic constitution called "Universi Dominici Gregis," governs the entire period while the papacy is vacant, known as the "Sede Vacante".

That constitution, which consists of an introduction and 92 articles, details everything about the running of the Church in the absence of a pope, including the preparatory meetings for the conclave, the start of the conclave, the oaths of secrecy and the election procedure.

The other main document, "Ordo Rituum Conclavis," or Rites of the Conclave, is a 350-page book in Latin and Italian that details the rituals, prayers and chants inside the secret conclave.

That book, which was last updated in 1998, includes the Mass in which the cardinals pray at the start of the conclave, the ritual of the election and even the precise Latin formula with which the new pope accepts his election and chooses his name.

It was not immediately clear how the two documents could be "harmonized" because one is a detailed, legalistic document and the other is more of a ceremonial handbook, similar to a missal.